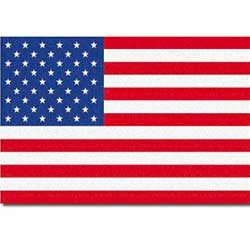 The Game of the Week in the American National Rugby League Atlantic Conference lived up to its billing with the surging Pennsylvania Bulls and Connecticut Wildcats putting on a show Saturday in the Philadelphia area.

In the end, the Bulls powered home to a 60-30 victory to punctuate Round 6 action.

The Iowa City Crash have made a promising start on debut in the American National Rugby League Midwest Conference with a spirited performance before going down 32-14 to the Chicago Stockyarders at Winnemac Park in Chicago Sunday in Round 2 of the Conference schedule.

The Crash raced to an early 8-0 lead with unconverted tries by Irish import Tom Lenihan, after good work from standout Nick Young, and player/coach Brad Fuhrmann to stun the home side.

Two teams have started to make a break from the pack, while a third is still in contention at the midway point of the 2012 American National Rugby League Atlantic Conference season.

Round 5 winners included the New York Knights, Pennsylvania Bulls and Northern Raiders. The results saw the Knights remain on top of the standings with the Bulls leapfrogging the Connecticut Wildcats into second place and the Raiders taking a firmer grip on the four spot.

The Game of the Week saw the high-flying PA Bulls continue their hot streak with a high-scoring 52-30 victory Saturday over rivals the Bucks County Sharks. It was the Bulls' fourth straight W.

The Sharks were very much in touch at the end of the first quarter trailing just 10-8, but from then on the home team made every post a winner to eventually outscore the visitors by 10 tries to six.

The Western Storm has opened the AMNRL's new Midwest Conference with a comprehensive 30-6 win Sunday night against the more established Chicago Stockyarders at Winnemac Park, Chicago.

After a nervous opening with both teams struggling to hold onto the ball, the deadlock was broken when the Storm's Conor Hanley pounced on a loose ball and raced 60 yards to dot down in the left corner. 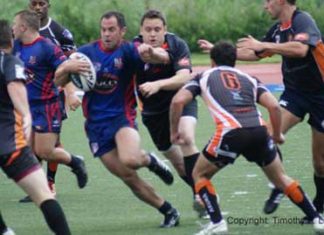 The New York Knights have hung on to clinch a nail biter in the Grand Final rematch, defeating the Connecticut Wildcats 26-22 in the second round of the AMNRL's Atlantic Conference.

Going into the match as heavy favorites, the 2011 champions were quickly placed on the back foot, as the Wildcats got off to a hot start that took them to a 10-6 lead at halftime.

The PA Bulls have scored back to back victories in consecutive weeks, defeating the Northern Raiders 40-22 in Round 4 of the American National Rugby League's Atlantic Conference.

Coming off a thrilling victory last week over the New York Knights, the Bulls showed no signs of complacency as they ran in eight tries to four, comfortably sealing the match. 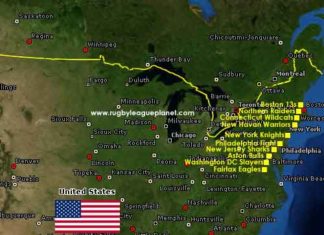