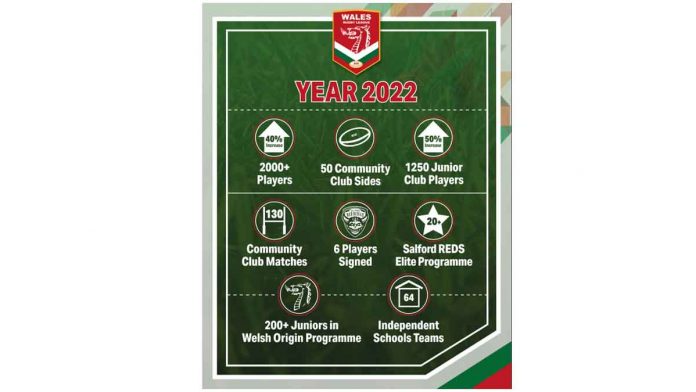 Wales Rugby League are pleased to report that participation levels for 2022 in club, regional and international sides are at an all-time high.

With a record 2,313 players recorded in the year ending November 30, it’s an increase of 40 per cent on last year’s figure and the largest since 2013.

Over a thousand junior players were registered with community clubs and regions – the first time this has ever happened in a calendar year. The figure of 1,250 was over a 50 per cent increase from last year, thanks to work of the community clubs and especially the success of the U10 league. The 14 active community clubs who played in the WRL-organised leagues throughout Wales fielded 50 sides, playing 130 club matches.

Included in this is an increase in registered girls players, thanks in part to the year-long regional “origin” academy sides for boys and girls where over 200 took part last season. Already players are registering and training for new girls’ sides for 2023.

Players can now see a genuine pathway to men’s and women’s Super League, and the men’s and women’s elite international sides, through the Wales Rugby League National Development Academy at Coleg y Cymoedd which is partnered with Salford Red Devils. The Super League club signed six Welsh players in 2022, had over 20 more participating in the Salford REDS Elite Programme, with one player in Joseph Coope-Franklin already having made his senior Super League debut.

In addition to the men’s World Cup, Wales reached the semi-finals of the Wheelchair Rugby League World Cup this year, and finished third in the Physical Disability World Cup. As a result of taking part in these tournaments, Wales Rugby League are happy to report an increase in rugby league participation among people with a disability; with Wheelchair Rugby League being the most inclusive of all sports fielding players with any or no disability and of any age or gender, welcoming trans-gender players.

Wales have also recently taken part in a Men’s Masters World Cup Festival – Masters Rugby League being open to those aged 35 and over and played socially with no winners or trophies. Some Wales Rugby League clubs again run sides for all genders with the introduction of Women’s Masters in North Wales helping to increase the figures in this category.

These participation figures don’t include schools sides – Wales have 64 in the 2022-23 Champion Schools competition which runs for 11 to 18 year olds.

WRL chairman Brian Juliff said: “The return to playing rugby league in Wales since the Covid issues has been very encouraging. It’s good to see community clubs engaging across the age groups and genders to bring the game to a wider public than ever before.

“Wales Rugby League are keen to expand our reach into the community and provide enjoyable as well as competitive sport for all participants. We are actively promoting and recruiting for our Wheelchair, Physical Disability, mens, womens, girls and boys teams at all age groups across the nation.

“Similarly we would encourage and welcome those who would like to support the teams as administrators, coaches, medical staff and general voluntary duties at our community clubs and within our development pathways.

“We value all participants and, with the next Rugby League World Cup in France in 2025, we are keen to increase our player pool and elite player pathways across all participating platforms.”

WRL general manager Mark Jones said: “After a huge increase in participation in Wales and a World Cup that has gripped the nation, our emphasis is now turning the interest into sustainable pathways and ensuring there is a World Cup Legacy.

“The Rugby League World Cup in all of its formats has highlighted how inclusive and diverse rugby league is in Wales. Volunteers are key to our success and they will be our priority next year. We will be advertising new roles and initiating a continued professional development programme to reward our staff.” If you want to get involved in rugby league in Wales as a player or volunteer, please go to https://wrl.wales/community-clubs to find your local side, or email info@walesrugbyleague.co.uk for any further information.