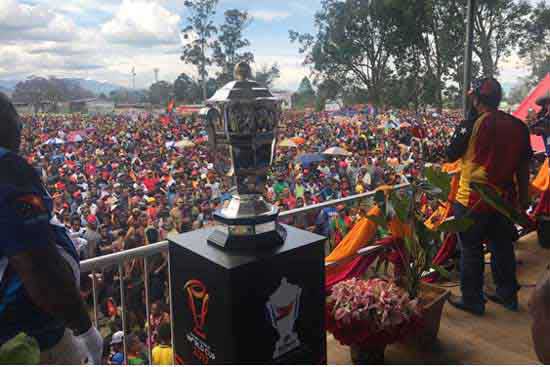 Papua New Guinea will face England in the World Cup quarter-finals after blitzing Wales 36-0 in Doncaster.

In heavy rain, the Kumuls showed their class with a resounding win in their final Group D clash at the Be Well Stadium.

It was a great start for Papua New Guinea in the bad conditions when Kyle Laybutt drifted over the line to score after just seven minutes.

Rhyse Martin added the extras to make it 6-0.

Four minutes later, Nixon Putt crashed over to push the Kumuls further ahead.

Martin’s kick was good to extend the lead to 12-0.

In the 23rd minute, Jimmy Ngutlik scored a brilliant long-range try. He busted through the middle and ran 55 metres to cross.

Martin kept the scoreboard ticking over with another successful conversion.

Eleven minutes from half-time and Dan Russell grabbed his team’s fourth try of the night, stretching out to score.

Wales had been dominated at the ruck and were behind 24-0 at half-time.

In the second half, the rain kept falling down, and another try came for Papua New Guinea.

On 46 minutes, Putt crossed for his second of the evening.

The Dragons didn’t give up and looked to hit back with a try of their own.

But the Kumuls’ defence was gritty and kept the Welsh at bay set after set.

With four minutes left, Kyle Evans missed a kick at the back, and Ngutlik picked up his second of the night.

Martin added the extras to finish off the Dragons.