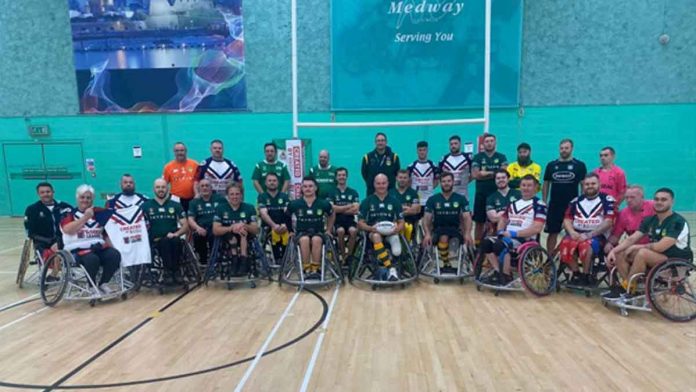 Australia will continue their World Cup warm-up when they meet Wales and Scotland in two wheelchair internationals before the tournament starts on 3 November in London. The Wheelaroos comprehensively defeated the British Army in Medway yesterday to get acclimatised, and will now face Wales at Cardiff Metropolitan University’s Cyncoed Campus on Saturday (kick off 2pm) before playing Scotland at Medway Park, Gillingham on Monday 31st October (kick off 2pm).

For Wales it means a first wheelchair international in the Welsh capital, something head coach Steve Jones is relishing. “It marks a milestone for us,” he noted. “It is also going to be a special game for Martin Lane as not only does he live in the city but works at the venue as well, so it is fitting that he will lead the side out in his first role as captain at this fixture.

“It will be a good to see how our squad stands up to the Australian team, who we haven’t played since the 2017 World Cup” he continued. “It’s going to be a very tough game for us but with Andrew Higgins back from America, Martin Lane, Gary Preece, and our most capped Wales player of all time Alan Caron all available it is a very strong and experienced squad we are putting out. We are looking to set a high benchmark for ourselves in our final warm-up game before we head to camp in Sheffield two days later.”

Scotland will field a squad with a range of experience, with 16-year-old Gregor Anderson set to earn his first appearance rubbing shoulders with Graeme Stewart, Scotland’s all-time record cap holder with 30 already to his name, and the experienced David Birtles who at 62 shows the inclusive nature of Wheelchair Rugby League.

“We’re very much looking forward to facing what I believe is the best prepared Wheelaroos squad there has been,” said Scotland head coach Mark Roughsedge. “I know they have been working very hard in the background and will be keen to start their World Cup campaign with a big performance when they face England. This game is ideal for us at this stage in our preparations as we know they’ll be asking a lot of questions over the 80 minutes.

“This also gives us a massive opportunity to give game time to our wider squad and really test the things we’ve been working on going into our opening World Cup game against USA.”

Australia head coach, Brett Clark, said: “I’m really looking forward to playing Wales in Cardiff and I’m sure the Aussie and Welsh spirit will be on full display there. These are the type of international fixtures as a coach you want for your team ahead of any tournament and it will be the first time since the 2017 World Cup opener that our two nations have played each other, both squads are much different, the game keeps changing, players skills are improving, it’s going to be an exciting couple of matches.”

The Wheelaroos will rely on the experience his players such as Pete Arbuckle player of the match award in the 2022 State of Origin fixture, whilst Brad Grove and Craig Cannane are set to appear at their third World Cup.

“Being able to compete in a number of international games in the lead-up is fantastic, given our last international game was in 2019,” Clark added. “Knowing that Mark Roughsedge, his players and staff have been working hard preparing for their opening game, it’s always good for both sides to have a hit out just to get any last-minute nerves overcome.”