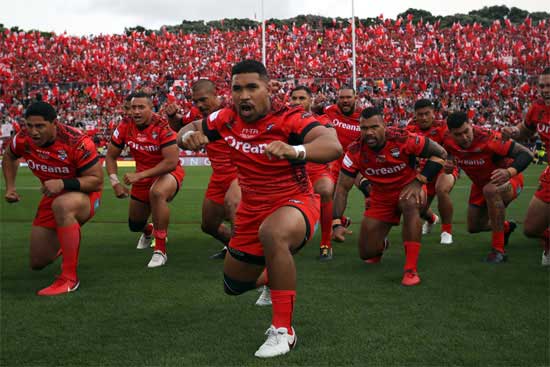 After reaching the final four of the last World Cup and knocking off both Great Britain and Australia in 2019, the Mate Ma’a are out to continue their upward rise and win the tournament for the first time.

Their first step comes against the Kumuls at the Totally Wicked Stadium.

St Helens will be familiar turf for some of the Tongan contingent, especially former Saints coach Kristian Woolf and current St Helens players Konrad Hurrell and Will Hopoate.

Woolf has named his 19-man squad for the PNG match, but both Hopoate and Hurrell miss out.

Huddersfield fullback Tui Lolohea is expected to start in the halves, but with Jason Taumalolo suspended Siosiua Taukeiaho will captain the side.

David Fifita will give Tonga some explosive power and strength, alongside the likes of NRL talent in Daniel Tupou, Addin Fonua-Blake and Felise Kaufusi.

This is an XVII packed with quality and athleticism.

Beaten by New Zealand in the mid-season Test, the Mate Ma’a will be out to show their results in 2017 and 2019 was no fluke and that they mean real business.

To do that they need to start this World Cup with victory.

But Papua New Guinea, who reached the quarter-finals in 2017 and upset Great Britain two years later, will be no pushovers.

They have a team packed with talent themselves and with a dynamic halves partnership to lean on.

The Kumuls have try-scoring skill in abundance in the shape of Alex Johnston, Xavier Coates, Nene Macdonald and Justin Olam.

The in-form Edwin Pape will start at hooker, while ex-Sydney Roosters playmaker Lachlan Lam and Kyle Laybutt will direct the side around the pack.

The Kumuls will pack plenty of punch with Rhyse Martin and Watson Boas and are bound to be a proper test for the Tongans.

In a contest likely to shake St Helens to its core, this is a fixture not to be missed.

Both sides will be looking for a win and to avoid England in the quarter-final stage.