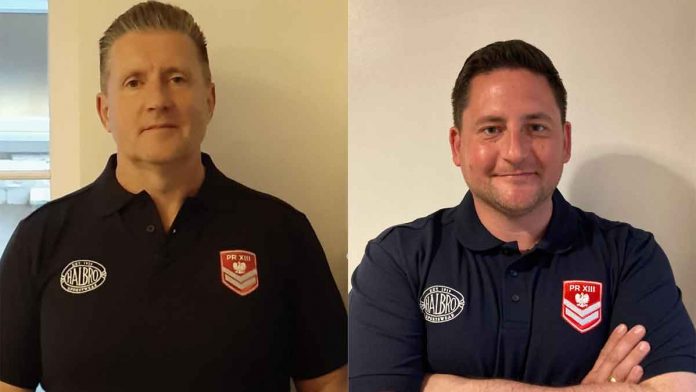 Polska Rugby XIII has announced a new coaching set-up for the national side. Colin Baker – former Hemel Stags and London Broncos men’s and current London Broncos women’s head coach – and Dean Reacher – who has headed up Hull FC’s scholarship scheme and been head coach of the Great Britain Student Pioneers – will share the role. Both have also been head coach of England Universities and have a wealth of experience at all levels of the sport.

In addition, Polska Rugby XIII has appointed former St Helens favourite Derek McVey as their head coach for heritage operations in the southern hemisphere. He will be responsible for coaching and development, as well as working with the board for representative matches there.

As Polska Rugby XIII continues to build their domestic competition, Baker and Reacher will be responsible for building a representative pathway in Poland, as well as identifying qualifying players based across Europe.

Lukasz Lucka, president of Polska Rugby XIII, said: “We are really excited to announce Colin and Dean as our coaching staff. There are both very experienced and have impressed us with how committed they are to growing rugby league in Poland. This recruitment is crucial for our development, the future of our national team looks bright.”

Dean Reacher commented: “I am really excited about this opportunity. It’s a great chance to make a difference and expand the game further. Working alongside such passionate people, I’m sure we can have a positive impact.”

Colin Baker added: “It’s a real thrill to be part of the journey to help Poland become a regular competitor in international competitions, together with developing the game in a country steeped in sporting achievement.”

Any players based outside of Poland who qualify via parent or grandparent and would like to be involved should get in touch with James Szymik on jamesszymik@hotmail.com in the first instance, to register their interest.