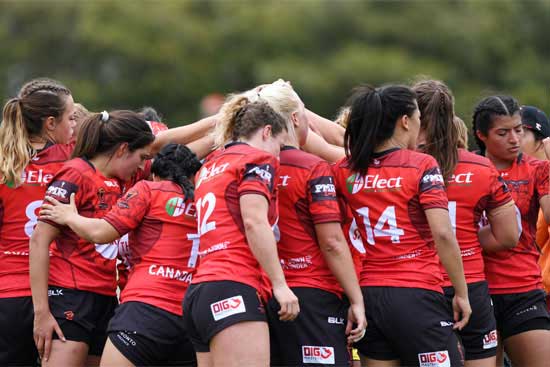 The Canada Ravens picked up from they left off in 2019 by defeating the USA Redtails 42-10 in their international women’s rugby league match in Burnaby, British Columbia.

The match played on Saturday, April 16th, was the debut game for the American women’s program following several years of preparation. Their international debut had been planned for 2021 but was postponed because of the pandemic.

On Saturday, the Redtails started like an Olympic sprinter out of the blocks and scored the first try of the contest inside the opening five minutes, but that would be the last time they would get on the scoreboard until the final quarter of the game.

After weathering the early flurry, the Canadians got their game together and controlled things through to the full-time whistle.

The match got off to a blistering start with the Redtails working the ball from inside their own end maintaining possession and gaining big chunks of ground, culminating in America’s very first try in international women’s rugby league with vice-captain Nicole Fisch dotting down beside the posts. The score was converted by Robin Oliveri.

From the resumption of play, the USA took the ball back downfield and were looking ominous again until there was a knock-on, giving the ball to Canada for the first time in the game.

The Ravens then began to find a rhythm and some barnstorming hit-ups by forwards Megan Pakulis and Petra Woods got them on the front foot.

Canada’s first try came around the 16th minute when Candace Scholten finished off some solid lead up work to score out wide, and from that point on, it was all one-way traffic.

Pakulis, Brittany Jones and Woods added further tries in the first half, one of which was converted by Natasha Naismith. Woods finished the match with a hat-trick of tries, while Jones and Pakulis each scored a double.

The second half was very much a continuation of the first with Canada constantly mounting pressure through enterprising play and relentless go-forward runs, forcing the USA into a continuous defensive pattern.

Woods opened the scoring in the second forty and was quickly followed by Pakulis, Zoey Siciliano, a third by Woods and Jones’s second finishing things off late. Halfback Sab McDaid and Naismith adding two conversions to round out the scoring for Canada.

The Raven’s last two tries were split by the Redtails’ second unconverted score by Carolyn Roach.

USA Women’s Rugby League CEO Garen Casey says all in all, he thought it was a pretty decent international debut.

“I liked their intensity,” Casey told Rugby League Planet about his players. “Things didn’t go our way with ball control and working out of our own territory and offloading when we shouldn’t have.”

“Those are things that come with playing the game a lot more. The small things that you get from experience is what was evident.”

“The Ravens girls have played a lot more league than what we have obviously. We lost our shape after we scored that first try, but our intensity was good, and we made good yards in attack. We kind of fell away with our shape and that just comes with playing the game more.”

“But I was happy with the overall experience and just to get where we were on the field is an achievement in itself.”

The win was the third straight for the Canadian women dating back to their undefeated tour of Serbia in 2019. It also improved their overall win-loss record to 4-3.

In the curtain-raiser, the Canada Selects beat USA Selects 30-10.

The Canadian women dominated for most of the game and outscored their American counterparts by six tries to two.