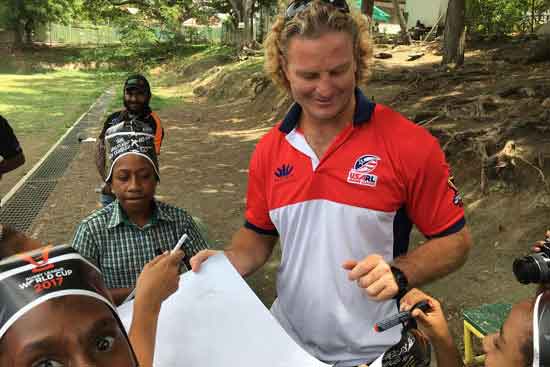 Assuming that the Rugby League Americas Championship will be played this year as planned, the United States will have a new captain.

The Americas Championship has been postponed twice since the start of the global pandemic. Initially, the 2020 iteration had been scheduled to be played in Jamaica but was pushed back to 2021 because of COVID-19. Then last year’s tournament, which was to have been hosted in the U-S, was cancelled for the same reason.

The European Rugby League (ERL) said at the time that the hope was to stage the event in 2022, depending of course, on where the world stood in terms of COVID.

“We are all hopeful that conditions that favour playing will return soon and as a region, we can start planning for the next instalment of the Championship scheduled for 2022,” Americas regional director Romeo Monteith said last year.

As things currently stand, the ERL has not made any further announcements on whether the tournament will in fact go ahead this year, and if so, where it will be played.

Regardless of what transpires regarding the Championship in 2022, the USA Hawks expect to name a new skipper this year anyway because their two previous co-captains are no longer in the mix.

One of them, Mark Offerdahl, is now the CEO/coach of the New York Freedom RLC, which was going to be but now isn’t, part of the fledgling North American Rugby League (NARL). At this point, the team’s playing future is unclear, although what is most likely is that it won’t be playing games in 2022.

The other former captain, Nick Newlin, announced on social media earlier this year that he has decided to hang up his boots so that he can concentrate fully on overseeing the Atlanta Rhinos, a former USA Rugby League (USARL) and now NARL, club that he founded.

Together, they took turns captaining the national team dating back to about the time when the USARL became the new national governing body and changed the team’s name from the Tomahawks to the Hawks in 2014/15.

That leaves Hawks head coach Sean Rutgerson in the position of having to choose a successor.

“I am thinking about a captain for this year’s games but won’t be naming him for a while, and at this stage, not sure whether to have a permanent captain or not,” he tells Rugby League Planet.

The makeup of the men’s domestic club competition is not yet fully locked in for the upcoming season, particularly the North Conference, which has been gradually losing teams for one reason or another in the last few years. On the flipside, however, the South Conference looks to be pretty much the same as it was in 2021.

“We still have a few great options for captain, and we will see how they pan out,” continues Rutgerson.

“We will have to see what teams play in the competition from up north this year. But seeing as they missed a whole year, the north teams that did not play certainly did their players no favours.”

The key, says Rutgerson, is to take time to make a decision.

“I’m in no rush at the moment,” he adds. “I will talk to the board and see when an appropriate time is to name someone.”

And as far as the Americas Championship is concerned, Rutgerson says the USARL is making efforts to organise this year’s tournament.