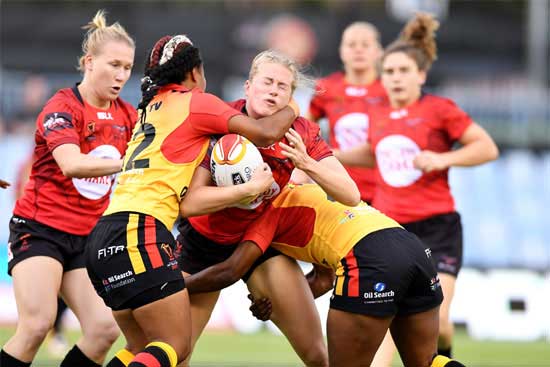 Canada Rugby League (CRL) isn’t letting the grass grow under its women’s program despite COVID-19. It has set its sights firmly on planning for the Women’s Rugby League World Cup (WRLWC) later this year.

The Canada Ravens are bracketed in Group A alongside England, Brazil and Papua New Guinea. The #6 ranked Canadians are scheduled to open their campaign against the #4 PNG Orchids on November 1st in Leeds.

As was the case with most rugby league internationals in 2021, the Ravens didn’t set foot on the field for any games because of the pandemic. They had a match planned against the United States Redtails last October, but it was postponed because of COVID. It was to have been the inaugural game for the American women’s program.

“The current plan is for us to bring our squad together in Vancouver in April for a training camp which will finish with a game against the US,” Castle said.

“We’ll need to see what the COVID situation is closer to the time, but we’re very eager to finally get our squad together. I know the US are also very keen to get their women’s program off the ground too, so we’ll be doing all we can to make this game happen.”

Castle goes on to say that game is just the beginning of what is on the table for this year in the lead up to WRLWC2022.

“We are also having early discussions with the US about a follow-up game later in the year,” he said. “We will look to extend an invitation to a team from the South Pacific with the view to play a tri-series.”

Just which country that may be has yet to be determined. He said there’s a long way to go before that becomes a reality, but the Ravens and CRL are optimistic that they can make it happen.

Plus, he said that’s not where things are set to end.

“In addition, we’ll also have the East Coast vs West Coast game in September which will give us a chance to see our best players compete against each other before we finalise our World Cup squad.”

“If everything goes to plan, we hope to go into the World Cup well prepared.”