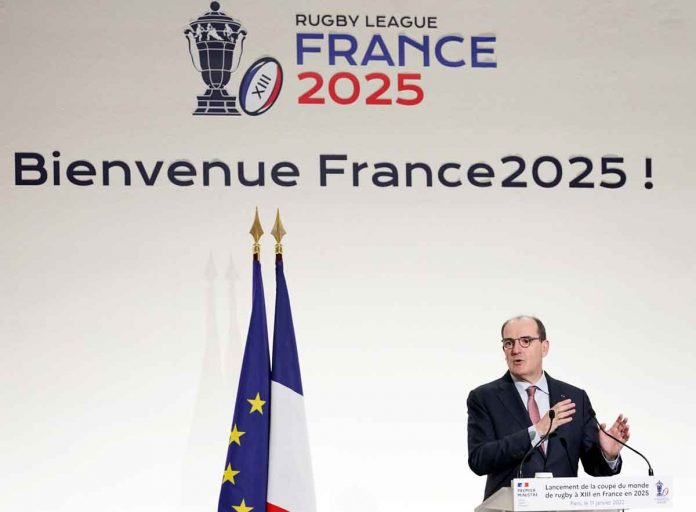 Interim chair of the European Rugby League (ERL) board, Graeme Thompson, has warmly welcomed the awarding of the 2025 Rugby League World Cup to France, following on from this year’s event in England. France, who through Paul Barrière inaugurated the concept, held the initial tournament in 1954 and again in 1972, and were formally confirmed as the hosts in a ceremony in Paris in the presence of French Prime Minister M. Jean Castex (pictured).

“It is tremendous to see the tournament returning to its inaugural home,” said Thompson. “The European Rugby League congratulates French Federation president Luc Lacoste and his team on being made the host of the sport’s greatest competition, they have been rewarded for a tremendous amount of hard work and in enlisting such significant government support.

“Whilst it may only be a short distance for the World Cup to travel from England in 2022 to France in 2025, it is a major step forward and an exciting journey for the sport especially in the northern hemisphere, which gets a very rare opportunity to host on consecutive occasions. On behalf of all the nations in the ERL we will continue to be fully supportive of France as they work towards the staging of the 17th World Cup, the pinnacle of our game.”

“Rugby is a French passion. We know in this health situation how important sports can be, especially for the youth,” noted PM Castex, who confirmed that 128 matches will be played across four tournaments for the first time – men’s, women’s, wheelchair and youth. “The Rooster you can see on top of the trophy is going to sing again in 2025,” he added.

“This project is tantamount to who we are and what we represent, and for the Federation will be a great accelerator. The entire French territory will be involved,” noted Federation Francaise de Rugby a XIII president Lacoste.

It was also confirmed at the awarding that, as part of the economic plan, 90 per cent of the games will be played in middle-sized towns, with only the semi-finals and final in cities. Government support, split between French state and regions, will also include the three year build-up to the tournament, the rollout of a sports pass for young and the underprivileged to join clubs in an effort to increase participation, the institution of job training apprenticeships, together with facility development.

In addition, corporate social responsibility and cohesion is at the core of the event, including low carbon emissions meaning short distances for teams to travel in the cleanest way. The mapping exercise is set to be presented to the French government in October/November, with host towns announced at the end of this year.