Bosnia and Herzegovina Rugby League Association and club FIS Vitez have completed the first part of their youth project, ‘Play sports, Play rugby league’ with a touch tournament at the Vitez City Sports Hall, supported by the local Municipality and regional government.

After more than a month and a half of work at the Vitez Elementary School, a competition between classes was organized with students from 6th to 9th grade. About 200 participated and learned rugby league skills, ending with a touch tournament for trophies presented by the Municipality of Vitez chief executive Boris Marijanovic, and after which they were all awarded diplomas.

The BHRLA are hoping that the interest generated will see more players joining the club whilst the scheme is next set to feature an inter-school competition. 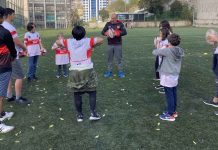