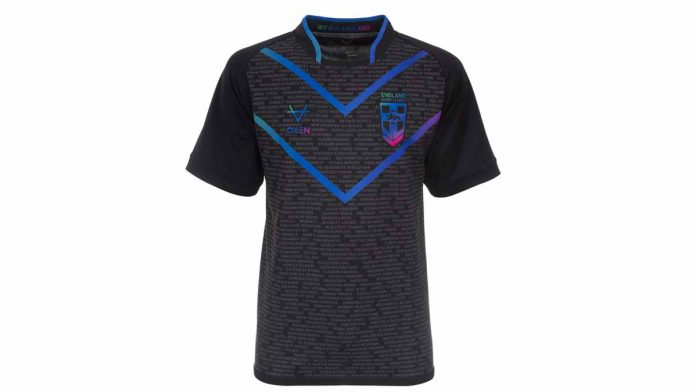 The name of every Community Rugby League club in England features on a limited edition shirt unveiled today by RFL kit partner Oxen.

Community clubs are widely considered to be the bedrock of Rugby League in this country and the starting point for all England international players – past, present and future. The names of almost 300 clubs – from Accrington Wildcats to York Acorn – are imprinted on the attractive, short-sleeved shirt which also features the traditional St George’s Cross and ‘three lions’ emblem.

10 per cent of proceeds from sales will be reinvested into Community Rugby League.

OXEN CEO, Lee Jenkinson says:
“We’re proud at OXEN to be launching this new Community shirt which features every club in England. Showcasing how important the community clubs are to the sport, we are excited to announce that a proportion of each sale will be reinvested back into the sport at a grassroots level.

“With the supportive nature that Rugby League fans are renowned for, we believe having the ability to reinvest back into the sport is a massive factor as to why we know this shirt will be a success. We look forward to seeing Rugby League fans taking the opportunity to showcase their club and sport with pride.”

Alex Walmsley, an England international and Challenge Cup winner this year with St Helens, began his career with community club Dewsbury Celtic. Alex says:
“Community Rugby League laid the foundations for me to become a professional athlete and I owe a huge gratitude to Dewsbury Celtic. Without them I wouldn’t be a professional Rugby League player.

“The club is massive for the local community and for my family personally. My brother played there and my parents were heavily involved too. The club was like an extended family, a home from home. That’s Community Rugby League – being part of something special, creating bonds and friends for life.”

Marc Lovering, RFL Director of Participation and Development, adds:
“Community clubs are the bedrock of our game, the foundations upon which everything that is great about Rugby League are built. I’m pleased to see this being recognised in such a unique and imaginative way, and delighted that some of the proceeds from sales will be ploughed directly back into the community game.”

This limited edition shirt is available to buy now at eliteprosports.co.uk