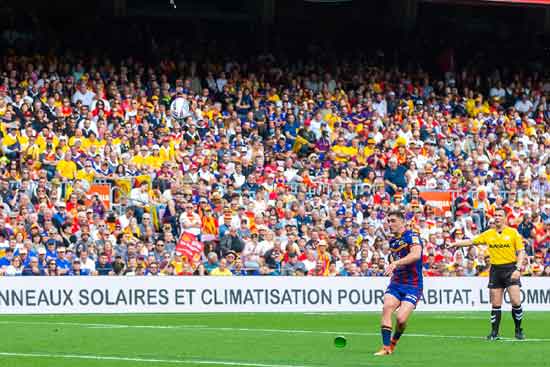 The 2021 Super League season is entering the final stages, with only a handful of regular-season games remaining. The attention of rugby league fans is slowly switching to the exciting playoffs and, ultimately, the Grand Final.

Catalan Dragons and St Helens are the two Super League teams at the top of the current standings, which makes it no surprise they are the hot favourites with the best online betting sites to lift the coveted Grand Final trophy at Old Trafford on October 9.

The Catalan Dragons finished fourth in the COVID-19 hit 2020 season, their highest finishing position since they climbed to third in 2008. However, 2021 has seen a major transformation in the Dragons’ fortunes, and they top the Super League in terms of points and win percentage.

The Dragons’ season so far

The Dragons currently occupy the top spot in the Super League with 16 victories from 18 games and a win percentage of 88.89%. The first of the Dragons’ only two defeats came in their second game, away to St. Helens on August 7, the second Super League game of the season.

St. Helens scored five tries in their 34-12 victory over Catalan Dragons, while Lachlan Coote kicked five out of five conversions, two penalties, and managed a try for himself as the Saints overpowered the Dragons.

Defeat number two happened on April 24 when the Warrington Wolves proved too strong for the Dragons. The Dragons were 8-0 to the good at home to the Wolves after 27 minutes, thanks to a try, conversion, and penalty from James Maloney. Warrington fought back in a frantic end to the first half and led 12-8 at the buzzer.

The Wolves continued their dominance in the second half and ran out worthy 24-8 winners.

The Saints have lost three games but are still favorites

St. Helens has won the Grand Final seven times in the Super League era (since 1996), including back-to-back victories in 2019 and 2020. The reigning Grand Final champions are slight favourites to win their third consecutive title, but there is not much to separate the Saints from the Dragons in the latest betting markets.

Saints find themselves second in the Super League table with 12 wins from 15 games and a win percentage of 80.00%. St. Helens has put in some dominant performances this season, evident by their points difference.

The Saints have scored 372 points through 15 games and allowed a mere 138 — the least of any other Super League outfit. Compare those figures to the Dragons, who have scored an awe-inspiring 525 points but conceded 312, and you can see how strong the Saints are.

St. Helens got off to a shaky start in the 2021 Super League when they lost at home to Castleford Tigers by 20 points to 10. Saints were already trailing the Tigers when both teams had a man sent to the sin-bin; Peter Mata’utia for Tigers and James Bentley for the Saints. Both returned to the field of play, but Saints still ended the game with 12 men after winger Tommy Makinson was given his marching orders.

Like the Dragons, the Saints also lost to the Warrington Wolves, doing so on June 17 in a low-scoring affair. Wolves prevented St. Helens from scoring a try as they ran out 6-2 winners on Saints soil.

May 22 saw St. Helens slip to their third defeat of the campaign. Ironically, it was against the Catalan Dragons. Dragons looked to be cruising until a spirited Saints comeback in the final ten minutes, which saw them score two tries and one conversion, gave Saints’ fans hope. However, it was not meant to be with Dragons holding on for a 20-16 victory.

Saints and Dragons face-off on September 4

St. Helens take on Catalan Dragons on September 4 in what will be the last time they face each other before a potential Grand Final battle. Should the Saints win, it will all but secure second place in the Super League and guarantee they do not have to face the Dragons again until the decider. What a game of rugby league that will turn out to be.