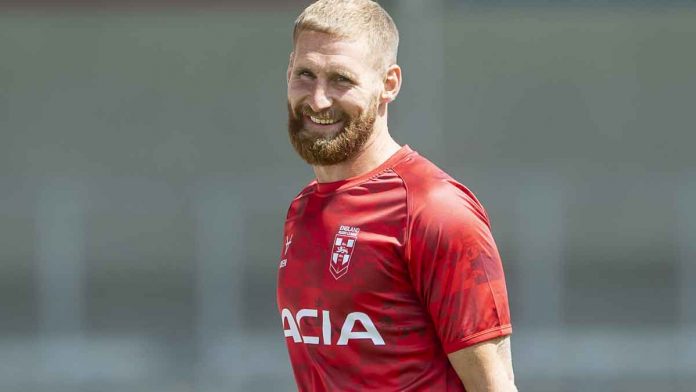 England’s captain for tomorrow’s match against the Combined Nations All Stars will be Catalans Dragons full-back Sam Tomkins.

Tomkins will lead out the side for the first time at Warrington’s Halliwell Jones Stadium on his 30th appearance in an England jersey*, almost nine years since he announced himself on the international scene with a hat-trick on debut against Wales in Bridgend.

Last weekend, as a measure of his commitment to the England cause, the former Super League Man of Steel drove for 16 hours straight from his home in the south of France to link up with the squad. Unable to travel from France by commercial airline due to public health and quarantine rules, Tomkins was given permission by his club to make the 1,000-mile journey to the team hotel near Manchester by car. His Catalans Dragons teammate, Tom Davies, was also given permission to drive separately with his partner and is now in line to make his England debut.

Tomkins said:
“Being named captain of England is right up there with anything I’ve achieved in the game. I’ve been really lucky to represent England a number of times over the years, but becoming captain is something else. I’ve played under some great captains over the years – Sinfield, O’Loughlin, Peacock – and hopefully I’ve picked some things up from them. Shaun will expect me to lead from the front, which is what I intend to do.

“The journey from France was something out of the ordinary. A 16-hour drive isn’t normal preparation for an England game, but Covid has turned the world upside down in lots of ways. I was told I’d have to drive in a single hit – no hotel stops, pay-at-the-pump petrol stations – but playing for England is something I’ve wanted to do since I was seven years old, so a 16-hour drive is nothing against being able to pull on an England shirt.”

Earlier this week Wane confirmed a 19-player squad, with Tom Davies one of six uncapped players included. St Helens’ Alex Walmsley has since been ruled out with a knee injury, leaving the squad as follows.

Tickets for Friday’s England versus Combined Nations All Stars game are available now from only £20 (adults) and £10 (under 16s) at eticketing.co.uk/rugbyleague . Due to current Covid restrictions a limited allocation of tickets is on sale now for this fixture, which is part of a historic double-header featuring the Women’s International between England and Wales.