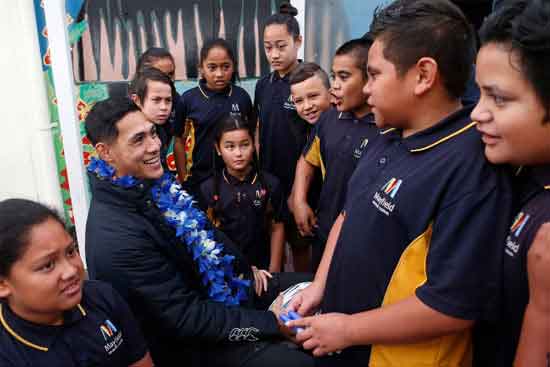 In late January this year, New Zealand Warriors chief executive Cameron George announced that Roger Tuivasa-Sheck would leave the franchise at the end of this season. Tuivasa-Sheck will change codes and join up with the Auckland Blues to pursue a rugby union career and a dream of playing for the All Blacks in Rugby World Cup 2023 in France.

Unsure whether he will play for the Kiwis at this year’s Rugby League World Cup, Tuivasa-Sheck says he only focussed on playing for the Warriors and helping them do the best they can this season.

His time at the Warriors

‘RTS,’ as Tuivasa-Sheck is also known, joined the Warriors from the Roosters in 2016. Moving into his sixth season with the club, he has an opportunity to achieve a few significant individual milestones before he moves from Mt Smart Stadium to Eden Park.

He is five games shy of his 100th appearance for the club. In another 12 games, he will become the second player, after club legend Simon Mannering, to captain the Warriors in 100 NRL games. And, if he plays another 21 games, he will reach his 200-game career milestone.

Warriors CEO Cameron George and coach Nathan Brown suggested that they would probably go to the market for a new fullback. According to reports, the club offered a deal to Jahrome Hughes, but the 26-year-old Wellingtonian, who has more than 50 NRL games to his name, decided instead to stay with Melbourne Storm. Similarly, there were reports that Stephen Crichton might be the player to move to Mount Smart Stadium, but he too recently put pen to paper, signing a two-year deal to stay on at the Panthers.

Pursuing free agents is not the only option available to the Warriors, but probably the more affordable one – at this stage.

Will it be a final swansong for Tuivasa-Sheck at the Warriors?

The Warriors are well placed after one round of games and lie sixth on the ladder. Betway Sports have them at 1.9 odds to win their round two game against fourth-placed Newcastle Knights at Central Coast Stadium. The Auckland club has a massive task in replacing Roger Tuivasa-Sheck. Not only is he a talented footballer, but he is also a well-respected and influential captain.