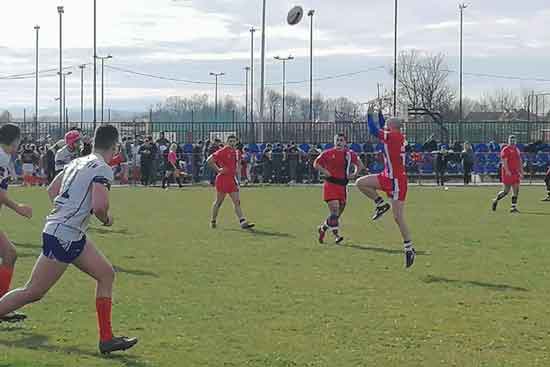 Whilst there are still concerns about the spread of coronavirus, two of today’s scheduled matches in the Serbian Cup – Dorcol Tigers versus Red Star and Tsar Dusan the Mighty against Morava Cheetahs – called off as precautions after a positive Covid test, the Serbian rugby league season has kicked off amid much optimism.

Already, Partisan 1953 has won the delayed 2020 Balkan Super League Grand Final, defeating Radnicki Nis, and followed that up with a surprise, inaugural behind closed doors triumph over great Belgrade rivals Red Star, 38-18, in the Super Cup decider at the SC Inge stadium.

In the traditional season curtain-raiser, 41 young players from seven clubs featured in the annual Risman Cup, named after the Hall of Fame family, team Bev (Serbia U19s) beating team John (Serbia U21s) with a try in golden point extra time. John Risman’s role as national coach and development officer for the sport in Serbia around the turn of the century, permanently recognised.

In addition, a first-ever domestic fixture has been played in Montenegro, South Region in the country one of the six clubs that make up the Serbian first division. The top four will play for the championship title with the bottom club joining RLC Morava Cheetahs from Leskovac, Paracin’s Tsar Dusan and RLC Locomotive of Sofia in Bulgaria, in a second division competition.

But it is other developments within the sport that are seen to be having an equal importance as results on the field.

“Player welfare and the safety of all involved in our competition is the top priority,” confirmed Serbian Rugby League Federation general secretary, Vladan Kikanovic. “But we have already seen a first-ever U14s full 13-a-side match when Patisan played Radnicki Nis, with the game officiated by women in another historic moment. Karolina Blizanac and Ljiljana Bajic refereed one each half, they were previously touch judges for almost two years and are now on the road to being fully qualified match officials.

“This is a significant move as part of our development strategy on gender equality and the empowerment of women in sport. It goes together with our resolution to increase the number of women on the SRLF board and in other governance areas. We are part of the EU Erasmus+ programme of ‘Fair Coaching’ which enshrines these objectives.”

In other ventures, seven more match officials have taken their level one course at FC Heroj Polet, the practical sessions run as part of the historic U14s game and, importantly in terms of increasing profile, the Super Cup decider was one of the first games broadcast on growing OTT platform Sportsflick – https://www.sportsflickglobal.com/ which is carrying weekly matches.

“The contract between the federation and broadcaster is revolutionary for the growth of rugby league in Serbia and Europe,” Kikanovic said. “This is a development agreement between the parties with the focus on growing the game and promoting its progress globally.

“Rugby league in Serbia is, in our opinion, a very much under-rated product, in terms of not only the quality and quantity of the domestic matches but also the brand appeal of the clubs playing with four teams in our first division that are affiliated to or share names with major sporting societies – Radnicki New Belgrade, Radnicki Nis, Partizan and Red Star.

Kikanovic added:  “In the last four years, we have consistently delivered the highest number of domestic matches outside of France and England in Europe, with clubs in the first division playing up to 18 matches per season since 2017. Add to this the growing number of junior representative and women’s matches, and you will see why we believe Serbia is delivering!

“Serbia has also led the way in the region in helping to establish the highly acclaimed Balkan Super League competition which, before the Covid pandemic, featured up to 18 teams from seven nations.”