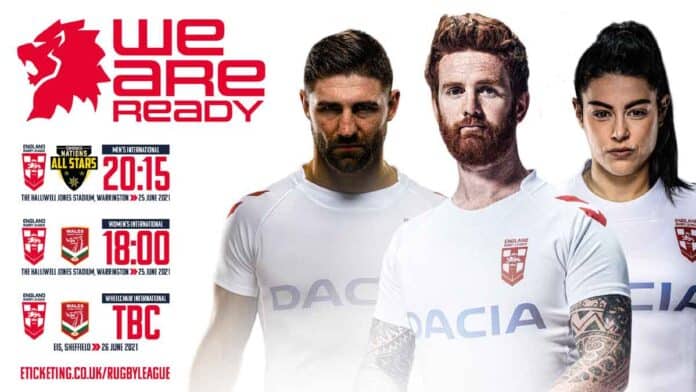 England’s Men, Women and Wheelchair teams will each step up their preparations for the Rugby League World Cup 2021 in a groundbreaking triple bill this June.

There will be an historic double-header featuring the Men’s and Women’s teams at Warrington’s Halliwell Jones Stadium on Friday June 25, with both matches to be shown live on Sky Sports – another exciting first for England Women, who will face Wales with a 6pm kick-off.

Then at 815pm, Shaun Wane will finally take charge of an England team for the first time, almost 18 months after his appointment as Head Coach, when his players face the Combined Nations All Stars.

The double header will be followed on Saturday June 26 by a Wheelchair Rugby League International at the English Institute of Sport in Sheffield, where Tom Coyd’s England team will also face Wales – with the kick-off for that fixture to be confirmed. The BBC will broadcast the match on their digital platforms in another significant first for the game.

The Combined Nations All Stars is a new name to reflect a concept born in Rugby League more than a century ago, when a team known as Other Nationalities faced England in April 1904.

The concept was revived as Exiles in four fixtures from 2011-13. But whereas that team was selected from imports from the southern hemisphere, the Combined Nations All Stars will draw on the traditions of the Other Nationalities, with players from all nations other than England available – including the other Home Nations, France and Jamaica.

Ralph Rimmer, the RFL Chief Executive, said: “In such a significant year for Rugby League as we prepare to host three World Cups in England, this is an announcement for the whole game to celebrate.

“To have the three England teams who will play in those World Cups in action over the space of 24 hours in June, and for the England Women and Wheelchair teams to receive unprecedented levels of broadcast exposure through Sky and the BBC, really sets the tone for what we want to achieve this year.

“It’s the best chance yet for Rugby League supporters to get behind those teams, as I know they will do in the World Cup.

“For Shaun Wane, who has had to wait so long for his first match as England coach, the priority for the Mid-Season International has always been the quality of opposition. After the postponement of the Ashes Series in 2020, this will be Shaun’s only chance to put an England team on the field until the autumn – and that’s why we have looked to the traditions of the Other Nationalities team, so that England will be facing the cream of the players from every other nation represented in the Betfred Super League.

“We believe those players will relish the opportunity of playing representative rugby in this unique context, looking back to the great names who represented Other Nationalities in the past. And we hope the All Stars concept will help create real longevity for this fixture.”

Final interviews for the Head Coach and Selector position for the Combined Nations All Stars were conducted on Monday, and an announcement will be made later this week, with further details of how the team will be selected.