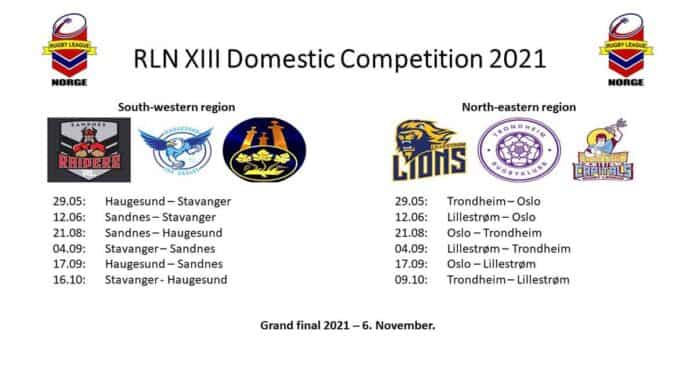 Rugby League Norge has set a return to play date for their domestic men’s competition of 29th May, according to president Jonatan Dam. “We are optimistically hoping that vaccinations will be far enough along by then that we will be given the green light for kick off,” he said.

“Norway is a quite large country despite being inhabited by a relatively small population and, to reduce travel demands on the clubs, the 2021 season will operate with two regional divisions, in the South West and North East. The respective winners will meet in the Grand Final for the right to be known as champions. We are hoping that this format will allow us to have more games as travel costs will be reduced for the clubs.”

There will be three teams in each division; Lillestrom Lions, Oslo Capitals and Trondheim in the North East, and Stavanger, Sandnes Raiders and newcomers Haugesund Sea Eagles in the South West.

Dam noted: “We are very happy to welcome Haugesund Sea Eagles to the domestic competition. Every time a new club joins the series it makes the competition harder and raises the level of rugby league in Norway. They have displayed great determination when it comes to training.

“Despite a Covid-19 riddled 2020, they still managed to complete 62 organized and safe sessions. I even received a video the other day of the team shovelling heavy snow off their pitch so that they could train in the midst of winter. If they are able to apply this tenacity to their games, I am sure they will do great in the 2021 season.”

Dam added: “This tenacity is something that has been a recurring theme in all the RLN’s clubs during 2020 and makes me very confident that the sport will continue to grow in the country. Their determination to train makes me optimistic for the future.”

Several of the clubs have set up on www.solidsport.no and RL Norge are hoping to be able to livestream the games on that platform.

Norway’s wheelchair team is set to make their debut at the 2021 Rugby League World Cup in England in a group with Spain, Australia and the hosts.