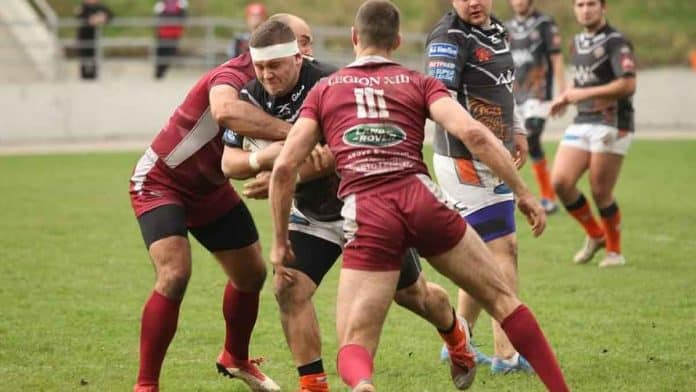 Rugby league in Ukraine is only 14 years old and has faced tremendous challenges, but the sport continues to grow. By John Davidson.

Life is never easy in the Ukraine. Sandwiched between Russia and a clutch of other nations in eastern Europe, the populous nation has faced revolution, violence, civil unrest and the annexation of Crimea in the past two decades.

But at the same, remarkably, rugby league was born in the former Soviet state. It has Artur Martyrosian to thank for that.

“I played rugby league in Russia in 2006 season for Vereya RLC and after that decided to start rugby league in Ukraine,” Martyrosian, president of the Ukrainian Federation of Rugby League (UFRL), explains.

The UFRL joined the RLEF two years later as an official observer. The first club, Legion XIII, was formed by students in 2007 and from that inauspicious start things have grown.

As a country, Ukraine started playing internationals in 2008 and has now played more than 20 Tests against the likes of the Czech Republic, Italy, Greece, Latvia, Russia, Serbia and Norway.

Despite economic and political upheaval, the sport is making inroads. Clubs have been formed in the cities of Lviv, Kiev, Kharkov, Ternopil and Mykolaiv.

“We are still growing after the world economical crisis in 2008, after conflicts in Crimea and Donbas in 2014 where we had at that time five senior and five junior teams,” Martyrosian says.

While in many places around rugby league and rugby union are in conflict, this is not the case in Ukraine. Since 2012 the UFRL and the union equivalent, the Federation of Regbilig Ukraine (FRU), have run joint projects in the shape of a  curriculum on rugby and rugby for children. This has included a contactless kind of game for children – rugby5 – to helping builds players and resources to the national teams.

Most recently, the UKRL has announced a partnership with the Sheffield Eagles as they look to forge greater links with the English game. Ukraine’s top competition, known as the National Rugby League Championship, is being reorganised with new regional teams that are aligned to English clubs.

The regional teams brands will closely follow those of the teams they are aligned to in the UK and Sheffield will provide support and advice where possible to Khmelnytskyi Eagles.

In qualification rounds for the 2021 World Cup, Ukraine defeated Malta 34-22 but was beaten by Greece 60-4. The Greeks obviously went on to book a spot in next year’s tournament. The latest world rankings have Ukraine in 39th position.

Even with off-field challenges, the 13-man code is moving in the right direction and seven years ago became a full member of the RLEF. The UFRL has a strong presence on social media and live streams matches.

With great collaboration from the UK and continued youth development, the sport’s future in the eastern European outpost appears bright.

“Also to hold in Ukraine the European Championships juniors, students and nines, so that Ukraine is a leader of development rugby league in the world.”