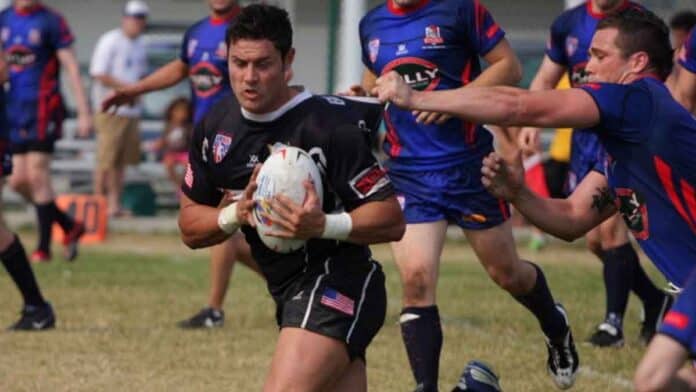 The 2020 domestic rugby league season in the United States was a total wash due to the global pandemic, but there are high hopes for a return to normal, or as close to it as possible, in 2021.

One team with an eye on next year already is the Delaware Black Foxes.

The Black Foxes are in the USA Rugby League (USARL) North Conference and will be aiming to improve on their impressive run in 2019 when they made it to the postseason. They went in as the #4 seed but lost in the first round to the Boston 13s.

In line with their goal, Delaware has made an early appointment in the head coaching role, naming Australian Liam Mulhall as the man to guide their national championship aspirations next season.

In 2002, he trialed with the South Sydney Rabbitohs’ NRL team but didn’t make the cut so he signed with Intrust Super Cup team Ipswich Jets and played for them in 2002 and 2003. He has also had stints with Brisbane Norths Devils and the former Perth-based (ARL) expansion team Western Reds.

More recently, Mulhall has been an assistant coach with the Wynnum-Manly Seagulls in the Brisbane Rugby League (BRL) A-grade competition in Queensland.

He is also no stranger to US club football as he played in the States in the late 2000s. He was the American National Rugby League (AMNRL) leading try-scorer (14) in the 2008 regular season for the Aston Bulls (pictured vs New York Knights), while he also booted 10 goals that year.

Towards the end of 2017, Mulhall reached out to several USARL clubs about a possible captain-coach position in 2018 and got interest from Delaware, Boston and (2019 national champions) Brooklyn Kings. He eventually settled on Delaware, but unforeseen changes in his personal situation prevented him from going, so he agreed to a role in which he assisted head coach Ian Ferguson remotely.

Mulhall said he was able to coach from afar because of his experience and knowledge of the 13-a-side game.

“Fundamentals don’t change in rugby league,” he said. “If you keep possession of the ball, nine times out of ten you’ll win the game.”

He agreed that while it was extremely challenging to coach from the other side of the world, it was doable. He was due to be on the ground this year until COVID-19 brought everything to a screeching halt.

Mulhall has already been busy recruiting players for the Black Foxes’ 2021 roster and has snared commitments from three BRL players.

Marouna Benioni, Hayden Crowley and Aaron Booth will all turn out for the Delaware team next season. All are from the Wynnum-Manly BRL club. Booth captained the team this season en route to a grand final victory and premiership three-peat.

“I’m very excited about next year,” Mulhall told Rugby League Planet. “Hopefully, things start getting better over in America because I’ve got a halfback, five-eighth and a lock who will come to play for us.

“My expectations will be pretty much the same as they are here. I expect 100% commitment. I believe a lot of it has to do your camaraderie and mateship that you have, and if you’ve got a tight-knit team you can succeed.

“Next year’s challenges will be keeping the boys healthy, in that bubble per se, and just making sure that they stay focused. We want to get them to become a professional outfit.”

Black Foxes CEO/founder Bjorn Haglid said Mulhall had been very helpful to the team in the last couple of years.

“Even while at home in Australia, he has helped us tremendously,” Haglid told RLP. “He helped the league with EV2 (sportswear company) by securing them as the league supplier.”

Haglid said the club will also be establishing a women’s team in 2021, the Delaware Black Vixens, and Mulhall will be heavily involved with that program.

According to Mulhall, his conversations with Garen Casey, who heads up the recently established USA Women’s Rugby League (USAWRL) national program, suggest there is every chance the American women could qualify for the 2025 Rugby League World Cup (RLWC).

“Americans have been brainwashed into thinking rugby union is a good game, but the skill level isn’t as high as it is in rugby league and I think women in the US will be able to pick up rugby league heaps better because it’s a simpler game.”

He is of the opinion that once the women’s game is picked up by sponsors and gets on TV in the US, and when people become aware that there is a women’s game, it will take off. And he believes that will also help to grow the men’s game in the US.

“I truly believe America has the athletes to get them into the top eight, 100%,” added Mulhall.