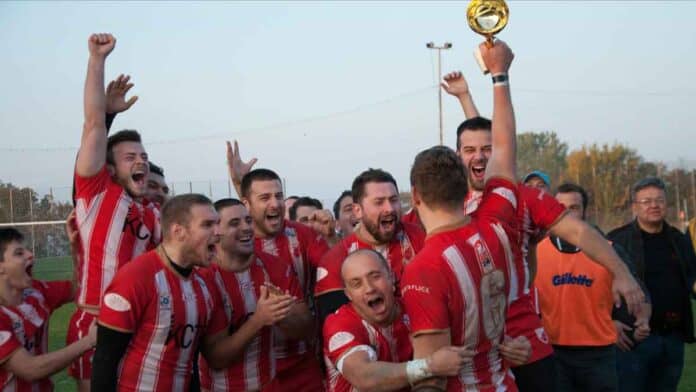 Leading 18-0 at half time through tries from Petar Milovanovic (27), Denis Chengaj (33) and Nikola Djuric (38), together with two Milos Zogovic conversions and a long range Vojislav Dedić penalty, Red Star seemed in control. But they could only manage a Zogovic penalty in the second period as Partisan tries from Dragan Jankovic (42) and Aleksandar Pavlovic (60) and two Dzavid Jasari goals set up a tense last quarter.

“I’m so proud of the 17 boys who played plus the juniors who are building the next platform for the club,” said Red Star director, Colin Kleyweg. “We rebuilt in 2020 for the future, knowing Partisan weas on the surge in form and quality. This match was intense from start to finish. Serbian Rugby League delivers the best for the end of 2020.”

His counterpart, Partisan director Admir Hadzic noted: “I think the victory we achieved in the Championship over Red Star relaxed our boys and we underestimated the strength of them in the first half, which was very difficult to chase in second half. Despite our disappointment, at the end, it was a great season; our boys they did their best and especially the young players coming through because we had two U18s in the team.”

The narrow win ensured that for the second consecutive campaign, Red Star did the domestic treble, winning the Super Cup, Serbian Cup and title.

Vladan Kikanovic, Serbian Rugby League general secretary added: “We are proud of both clubs. We all worked extremely hard and together in difficult circumstances but it is a great success that we completed the season in the conditions of the pandemic.”