Growing the game in Latin America

Since the 2017 Rugby League World Cup (RLWC) there has been an international push to grow the game of rugby league on a wider scale, and in many cases, this has been easier said than done.

Factor in the global pandemic and it has been virtually undoable, certainly in 2020 and quite possibly again in 2021, although the jury is still out on that one depending on the development of vaccines.

One of the burgeoning areas of the sport is Latin America. There are a couple of nations, notably Chile and Brazil, where the game has started to move ahead within the last four to five years, plus there are several others where starts have been initiated more recently.

Chilean national team head coach Rod Millar believes that prior to the onset of COVID-19, rugby league in South America was in a good place in terms of developing domestic competitions.

“I’ve had a lot of conversations with heads of the different nations and we were all in agreement on establishing domestic leagues as a priority,” said Millar.

“That was going well, however, COVID has put a hold on that and we’re now waiting for governments to allow the sport to resume so we can pick up the ball again and follow through with our plans.”

At this point in time, Chile would probably be regarded by most as the top ranked country in Latin America given that it is an affiliate member of the Asia-Pacific Rugby League Confederation (APRLC) and that it is now the fourth nation contesting the Americas Championship.

That said, however, Millar believes Brazil, which is also a APRLC affiliate, is rapidly rising up the ranks.

“I would like us to play Brazil so we can see how we’d go,” he told Rugby League Planet.

“I don’t want to be too presumptuous by saying we (Chile) are #1, but we are one of the two nations in Latin America that would potentially be the ones that would lead in establishing rugby league in the region.”

Millar said he would also like to see Argentina, Mexico, Nicaragua, El Salvador, Peru etc. establish domestic leagues because without them, a country struggles when it comes to competing internationally given the stipulation that nations need to have so many homegrown players and so many eligible overseas-based players on their national team rosters.

“There will never be a situation where you can play a whole lot of heritage players representing a nation. And it’s not fair to domestic players anyway,” continued Millar.

“It’s not easy, but you need domestic leagues with a minimum of four teams playing consistently.”

As far as Chile’s international program is concerned, the coach said they would like all of their international games to be sanctioned by the International Rugby League (IRL) going forward.

“There have been a few discussions lately in regards to an Americas Confederation,” he added.

“And what that means is that Latin America will be able to have the Latin American championships, as we had established prior to Chile becoming an IRL affiliate.”

Millar said in his opinion, that is the preferred way to develop the game in Latin America.

“If you have a sport that is sanctioned by an international sporting body, like the IRL, it’s a different story,” he said.

“Doors open and all of a sudden we start to get invited to participate and local councils want us to be part of activities in their areas.

The Chilean Weichafes have an overall won-lost-tied record of 3-2-1 since playing their first international against El Salvador in 2016.

So, just where does everyone in Latin America stack up in the international pecking order?

The IRL world rankings have not been updated for some time, but the most recent rankings for men’s teams had Chile at #32, the highest ranked country in South and Central America. Colombia was next best at #40 and Brazil checked in at #41.

Chile and Brazil are affiliate members of the IRL, Colombia has observer status.

Argentina is unranked and its IRL membership is pending, while fellow South American nations Peru and Uruguay have seen varying degrees of fledgling rugby league start-ups in recent years.

And it is a very similar story in Central American countries such as Mexico, Nicaragua, El Salvador, Honduras and Ecuador.

Latin Heat is another option that sprang up more recently, although it has no specific international affiliation to any one country in particular. It is a multi-national team that offers players of Central and South American residency or heritage a chance to play international games from time to time.

The Heat was initially formed from Australian-based Latinos but has since expanded to incorporate players from across Latin America, USA, UK and New Zealand. 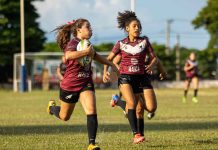