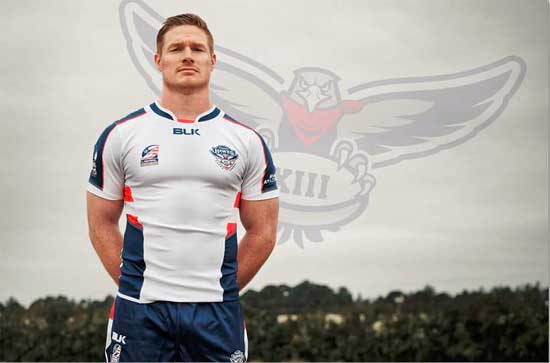 USA Hawks captain Mark Offerdahl has opened a new phase of his career by permanently relocating to the United States.

For the past few years, the national team skipper has combined his time in France, Australia and England playing rugby league professionally while also developing his business interests and has decided that now is as good a time as any to set up shop in the US.

He is an experienced personal trainer, who has also delved into developing and marketing natural and organic foods aimed at promoting a healthy lifestyle.

“During COVID, people (although they won’t admit it) are more susceptible if they are unhealthy and living a sedentary lifestyle, so what better time than to change some lives and open up a gym.”

Offerdahl has moved to Armonk, in New York state, which is in Westchester right next to White Plains, NY.

Depending on what happens in 2021 as far as the global pandemic is concerned and whether individual states will allow a COVID-safe return to sports, he plans to play for the White Plains Wombats in the USA Rugby League (USARL) club competition.

Typically, the domestic season kicks off in late May or early June and culminates with the national championship game in August. White Plains is in the USARL’s North Conference.

The national championship is usually followed by the annual North versus South All-Stars game in late summer, while the national team’s internationals are most often scheduled in late summer through the fall.

Offerdahl said he has ambitions to play again for the Hawks in 2021, as well as to contribute to growing the game domestically and the USA’s international program.

“More focused on making the comp stronger and national team stronger than my own ambitions in league.

“Also, going to push to have the (national team) name changed back to the Tomahawks.”

Offerdahl burst onto the international scene in 2011 when he was named in the USA Tomahawks squad for the Atlantic Zone Rugby League World Cup Qualifying (RLWCQ) series against Jamaica and South Africa.

The US swept that series in Philadelphia to advance to #RLWC2013, the first time America had made it to a World Cup after a couple of earlier attempts.

The Tomahawks then impressed in that tournament with wins against the Cook Islands and Wales en route to winning their pool and advancing to the quarterfinals.

Since around 2015, Offerdahl has captained the US side during its RLWCQ series and at #RLWC2017, while Nick Newlin has been the skipper for its domestic Test matches.

The national team’s name was changed from Tomahawks to Hawks in 2015 when USARL took over from the American National Rugby League (AMNRL) as the recognized national governing body.

COVID-19 has put paid to any international games in 2020 for the USA, however, all things being equal next year, the Americas Championship is tentatively scheduled to be played in May. The Rugby League European Federation (RLEF) canceled this year’s championship in June and has yet to name a venue for 2021.

The Hawks won’t be at #RLWC2021 in the UK as they fell to the Cook Islands in the very last world playoff game in November 2019.

#RLWC2025, which at one point had been given approval to be staged in the USA and Canada by the International Rugby League (IRL) when it was still the Rugby League International Federation (RLIF), is the next World Cup at which the US could potentially compete depending on how it fares in qualifying games.

As to whether Offerdahl will still want to be playing international football then would seem fairly unlikely at this point.

“Haha, doubt I’ll be playing then, would more be coaching!” he said.