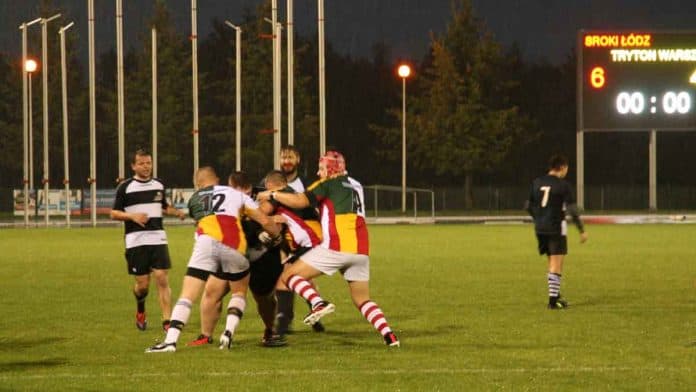 The match, played behind closed doors in mining town Bełchatów in central Poland because of Covid-19 restrictions, was the culmination of the first domestic season in the country involving four clubs; Wataha Piotrkow and Skierniewice Razorbacks the others.

PR XIII president Łukasz Łucka, commented: “It was a very exciting season for all of us in Polska Rugby XIII, and the Grand Final proved the progress we’re making both on and off the pitch. I’d like to thank all the players, coaches, match officials, and other participants that helped us make it happen. The development continues and we’re all ready to set ourselves the next ambitious goals for the coming years.”

In heavy rain, Tritons – who finished top of the league at the end of the regular season – adapted best to the conditions, Mariusz Ilczuk and a brace from Wojtek Lukasiewicz scoring long range tries, giving them a 14-6 half time lead.

With the floodlights on and adding to the sense of occasion, Magpies hit the front through tries from Lukasz Siewiera and Mateusz Kowalewski and the third of Kowalewski’s goals on the hour. In a desperate last 20 minutes the sides fought tirelessly; Bartek Lesiuk crossing in the final minute for Tritons to level.

Karol Romanski kicked the winning goal from in front of the posts as the final whistle sounded, leading to wild celebrations among the Triton players and staff.

The championships medals they received were funded by an anonymous donor to celebrate the 100th anniversary of the Battle of Warsaw.

Rugby League European Federation Central & Eastern Europe regional director, Jovan Vujosevic, said: “The RLEF is really proud that Polska XIII has completed its first domestic competition and take this opportunity to congratulate all those involved. This is a big step forward for Poland and we hope that they will soon apply for affiliate membership. With a large diaspora in the UK and Australia, Poland has great potential.”

That has been emphasised with the PR XIII sending its congratulations to Leeds Rhinos prop Mikolaj Oledzki, who is set to become the first Polish rugby player to grace Wembley in this weekend’s Coral Challenge Cup final.

Łucka noted: “There are a lot of people in Poland looking up at him. He’s a real role model, not only for the youngsters who are just starting out in the sport of rugby league here but also to the most experienced players, who are much older than him. His performance and professionalism make us all proud and we wish all the best to him, not only on the final day but every time he plays.”

Gdansk-born Oledzki, who has family in Warsaw, has also received congratulations from the Polish Embassy in the UK and said: “Rugby league is slowly emerging in Poland and it would be great if it could expand. I’m grateful to have the support from everyone.”

Any players, volunteers or officials with Polish heritage wishing to get involved in supporting the development of rugby league in the country, please get in touch with;