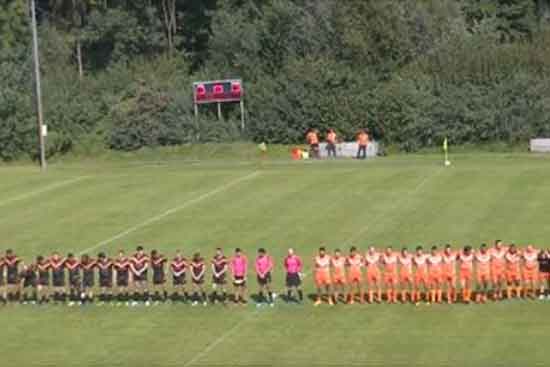 Netherlands and Germany have named their squads for this Saturday’s (26 September) Griffin Cup encounter which, because of increased coronavirus restrictions in the region, has been moved from Leiden to RC Eemland, Amersfoort.

The ranking Test match is scheduled to be the only international rugby league fixture to take place in the northern hemisphere in 2020, and a huge amount of work has been undertaken by the Netherlands RL Bond to prepare for it, the change of venue necessitated by Germany’s travel ban to certain regions of the Netherlands. Kick off will now be 17.00h local time.

Germany RL president and head coach Bob Doughton said: “This is the eighth time that our nations will have competed for the Griffin Cup but this year it has taken on a special significance. The Cup came about through the friendship between our founder, Simon Cooper, and Netherlands stalwart Jason Bruygoms.

“Over the years, our two nations have grown together with players from both countries taking part in each other’s domestic league. This is the first occasion for us since we lost Simon – after his immensely brave fight with cancer – and it is right and proper that it should be against our friends from Holland; the fighting spirit to get it on is very much in keeping with Simon and his character.

“Covid-19 has added unwarranted stress to the organisation of the match and, on behalf of all of the rugby league community in Germany, I would like to express our eternal gratitude to the Dutch RL for the tremendous work they have done to get it on. Nearly all of our players have played no rugby this year but that the match should take place at all – and in a safe environment – is our overriding concern. That said, our players have an added incentive to bring the trophy home.”

Netherlands head coach Kane Krlic added: “First and foremost, I want to pay my respects to Simon Cooper. He wasn’t just a rugby league pioneer, he was also a great man who brought a smile to your face whenever you were around him. If it wasn’t for Simon, Dutch rugby league also wouldn’t be where it is now. He was always there to bounce ideas off and also support the NRLB in any way he could.

“I’m really looking forward to the match, they’ve selected a very strong squad so it’s going to be a challenge for our players – but year upon year we have been getting better and I am hoping that this will be another step in our development.

“More importantly, in these difficult times for everyone, it is just great that we are playing. Our board has gone above and beyond to get the game on , they all deserve tremendous credit. Hopefully all the players will go out there with a smile on their faces and enjoy the occasion.”

Jovan Vujosevic, Central & Eastern Europe regional director for the Rugby League European Federation, commented: “The efforts undertaken by both governing bodies – and especially the hosts – to ensure, as best they can, that the game goes ahead safely for all concerned is a massive credit to them and the sport in this ever-changing and uncertain period.”

Member of the Czech parliament, Jarda Bzoch, has been appointed to referee and live stream details will be advised later this week.