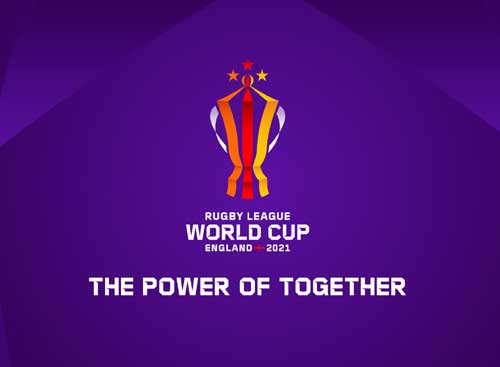 With 500 days to go until the opening fixture of the Rugby League World Cup 2021 (RLWC2021) at St James’ Park in Newcastle, the organisers have today revealed a new brand identity, celebrating the Power of Together, with the goal of connecting the tournament with a universal audience.

The refreshed RLWC2021 brand symbol – the Cup – is a natural progression from the previous tournament identity. The new Cup is built from red, orange and yellow ribbons representing the men’s, women’s and wheelchair tournaments respectively. The ribbons embody each of the three individual tournaments coming together into one. The ribbons are symbols of connection and triumph.

The inclusion of stars is a metaphor for the three world class tournaments. They orbit the globe at the pinnacle of the Cup, symbolising the unified passion of all nations, teams and communities striving towards the World Cup – ‘reaching for the stars’.

New colours have also been introduced with Power Purple now the lead colour representing the tournaments values of inclusivity and boldness. This new brand will give the tournament vibrancy and help showcase the tournament over the next 500 days, while organisers work to deliver the biggest and best rugby league world cup ever.

The new branding will also include bespoke elements from each host, that draws on its most recognisable icons and displays the sense of civic pride each host has for its town or city. RLWC2021 will be asking the people from each town and city to vote on the icons that make up their custom patterns in the coming months and will be doing something similar for the nations towards the end of the year.

Terri Lynam, RLWC2021 Customer Director, said: “Today, 10 June marks 500 days to go until the tournament gets underway in spectacular fashion in Newcastle. It also marks another hugely exciting milestone on the road to Rugby League World Cup 2021, with the refreshed brand reveal.

“The Power of Together, allows us to focus even more on human interest stories, emotional connections, and a celebration of togetherness. Our refreshed World Cup identity showcases our values of inclusivity and boldness by incorporating all three tournaments into one logo. The new colours and the way we want to celebrate the hosts and nations in a different way, effectively represents the uniqueness of RLWC2021.

Please visit www.RLWC2021.com for more information and for details on how to sign up to the receive ticket alerts and all the latest news first.