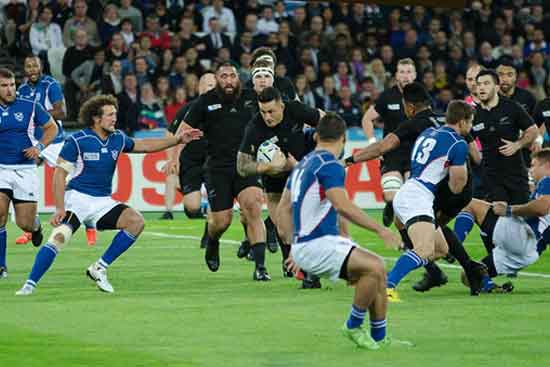 Sonny Bill Williams gaining ground for the All Blacks against Namibia. Photo by: etgohome1 (Flickr).

There was something about a Mike Tyson-Sonny Bill Williams boxing match that made perfect sense on so many levels.

Tyson, the former world heavyweight champion, was boxing’s bad boy. Williams remains one of the most colourful characters ever to set foot on a rugby pitch.

Together in the ring, they could have made for a magically entertaining affair. There were also betting lines being offered on the proposed bout, and in the time of coronavirus, any potential sports action was worthy of note.

According to a report in the Daily Mail, Australian celebrity agent Max Markson, who’d hoped to broker the deal to get Tyson to fight Williams, was informed by Tyson via text that he wasn’t interested in boxing the All Blacks star.

Tyson was offered $3 million to fight Williams in Melbourne in 2021. That this bout won’t come to fruition is sad on many fronts but perhaps mostly because it would have added another chapter to the spectacular life led by Williams.

Has any current rugby star provided more entertaining twists and turns throughout his career who could even hold a candle to the many adventures experienced by Sonny Bill?

Known for his infamous fouls later in his boxing career, Tyson, who once notoriously took a bite out of Evander Holyfield’s ear during a heavyweight title bout, may have bit off more than he can chew when he dissed the pugilistic credentials of Williams.

According to Markson, Tyson, 53, who was 20 when he first won the world title, making him the youngest heavyweight champion in boxing history, texted him to suggest that fighting a rugby player “would be an insult to boxing.”

“He says if he does get back into the ring it will be with a real boxer,” Markson further added in the Daily Mail story.

Williams stepping into the squared circle is no stunt, however. He’s done so seven times as a professional between 2009-15, and stepped out a winner from all seven bouts, including three victories via knockout.

Botha decisioned Axel Schulz in 1995 to win the IBF world heavyweight belt. In 1999, Botha suffered a fifth-round knockout at the hands of Tyson, giving Williams and Tyson victories over a common opponent inside the ring.

In February of 2019, Williams made rugby history when he signed a two-year deal with a reported $10 million with the Toronto Wolfpack in Canada. He became the first major international rugby star, and the first All Black, to sign a contract to play the sport for a North American side. Toronto plays in the English Super League.

The move also marked his third return to the 13-man game. Williams previously played rugby league in Australia from 2004-08 and again in 2013-14. He also made a dozen international appearances for New Zealand.

“I always have a point to prove, no matter where I am,” Williams told The Guardian. I wouldn’t still be around after 18 or 19 years if I didn’t have that inner drive to succeed.”

Beyond what he’d bring the team from his position of second-row forward, Williams was also prepared to utilize his status as a rugby legend to help the game prosper in a country where it is still a developing sport.

“I understand the responsibility is to use my profile in whatever capacity I can to help grow the game – and I’m all for it,” Williams said. “If it means (going) and speaking to young kids, I’m for it. This is such a blessed opportunity, being able to experience this on and off the field. If it opens a few doors for kids in Australia, New Zealand and the islands to succeed . . . how cool would that be?”

Switching to rugby union in 2008, Williams brought his game to France with Toulon. When he made his All Blacks debut in 2010, Williams followed Karl Ifwersen as the second man to play for New Zealand internationally first in rugby league and then in rugby union.

Williams is one of just 20 men to win multiple Rugby World Cups, capturing titles with the All Blacks in 2011 and 2015. He’s also played Rugby Sevens for New Zealand at the 2015-16 World Rugby Seven Series and in the 2016 Rio Summer Olympics.

Shortly after picking up his second RWC gold medal following New Zealand’s 34-17 dismantling of Australia in the 2015 final at Twickenham, Williams came to the rescue of a young All Blacks fan who’d ventured out on the pitch to join the celebration.

After watching an overzealous security guard tackle young Charlie Line, just 14 at the time, Williams came to the rescue of the boy. He then stunned the young lad by presenting him with the gold medal he’d just won for defending the RWC title.

“I was walking around doing a lap of honour with the boys and a young fella came running out and he got smoked by the security guard, like full-on tackled him,” Williams told New Zealand One News at the time. “I felt sorry for the little fella.

“If that was a younger brother or cousin, I would have given the security guard a hiding. But I just picked the kid up and took him back to his old lady and tried to make the night more memorable for him. Better [for the medal] to be hanging around his neck than mine.”