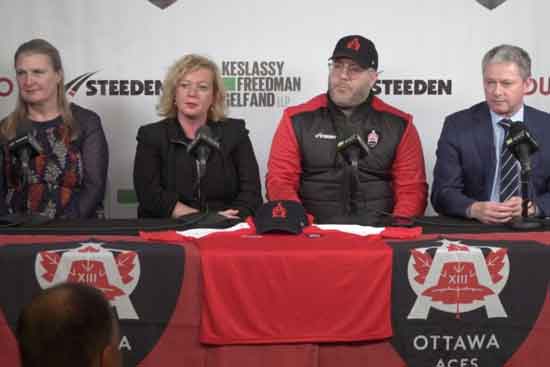 The Rugby Football League has confirmed the relocation of Hemel Stags to play in the Canadian capital, Ottawa, in Betfred League 1 in 2021.

The Ottawa Aces held an introductory media conference at the TD Place Stadium Monday, which was attended by Simon Johnson, chair of the RFL.

Simon Johnson: “I was delighted to be present at the TD Place Stadium for the launch of the Ottawa Aces and to confirm that the Aces will enter our competitions in 2021.

“It has been a long journey to get to this point, and I congratulate Eric Perez and his partners and investors for their commitment and vision to relocate the Hemel Stags to become the Ottawa Aces, along with the wishes of the Championship & League 1 clubs.

“That reflects the benefits to our competitions and clubs from the progress of Toronto Wolfpack through League 1 and the Championship over the last three years.

“In Rugby League’s 125th year, as we celebrate the rich heritage of this sport, the introduction of Ottawa Aces to the competition allows us to look to a colourful, expansive and global future. They will bring a new and passionate audience to our great game. The wonderful facilities here in Ottawa will bring an exciting new element to the Betfred League 1 next season.”

All Ottawa Aces home games in Betfred League 1 during the 2021 season will be streamed live on the Our League app.

The RFL also confirmed that discussions with New York Rugby League are progressing and that negotiations are advanced for New York to enter the Coral Challenge Cup next year.

If these negotiations are completed, New York would enter at the first-round stage.

New York Rugby League is scheduled to hold a media conference in Liverpool on Tuesday (March 10).