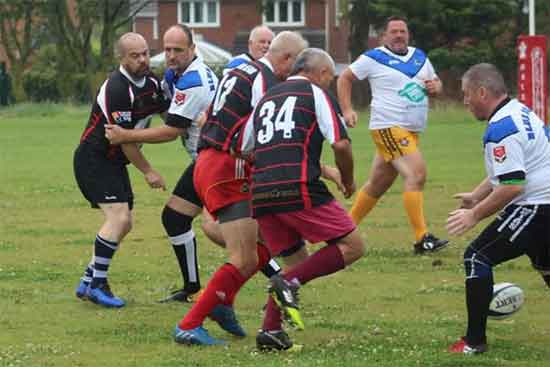 Wales have selected their first ever “Masters Rugby League” squad, who will compete against England and Ireland in a Tri-Nations Day in Bethesda on Saturday 16th May.

Masters Rugby League is played by people aged 35 and over with the rules being slightly modified to cater for the older player. Historically, there have been no winners, no champions and no cup finals – Masters is about is all about the spirit of the game. The most important rule is: “everyone has to buy a drink for their opposite number!”

The first ever Wales squad has been selected from players who are currently playing for Masters Rugby League clubs. There are two such clubs in Wales – Cardiff Blue Dragons and North Wales Buccaneers, who faced each other last year – and they each provide eight of the 18-man squad.

Wales Masters player-coach Chris Thomas said: “I’m really pleased to announce the first ever Welsh Masters squad. This is a fantastic opportunity for the players to make history.

“Our team selection was based primarily on the players’ contribution to Masters Rugby League. It was a difficult choice on who to select and for us not to advertise for trials this time, but we decided to reward players on their commitment to their clubs and their training, in addition to how well they played last season. We wanted to make this selection prestigious.

“We’ve a great future for Masters Rugby League in Wales. We hope to take on Australia later this year if we can, plus there’s a Master World Cup next year. The future is looking very bright.”

If you want to play Masters Rugby League, please send an email to masters@rugbyleague.wales stating your location for more information on your local club.