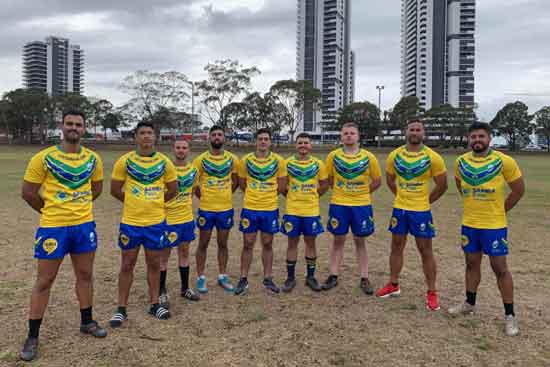 YOU could forgive former Super League player Matt Gardner for rolling his eyes whenever questions of his Anglicised named and international allegiance are raised.

That’s because after enduring a wretched 2019, marked by one of the cruellest heartbreaks, he now has only his Brazilian-born mother Tereza to speak to when he phones home.

“I went to visit my parents back in Barrow in England last November, and on the very last day when I was to leave town, I got the call that my father was in trouble,” reveals Gardner.

“I raced over there at 6.30am and by the time I got there, the paramedics were working on Dad.

“Nothing prepares you for a scene like that. It was a massive shock.

“It was pretty full-on. You never expect to be in that position.”

That’s why it’s an emotional week as the 34-year-old prepares to return for his first match since farewelling his father.

Not only is Gardner wearing one hat as the history-making Brazilian women’s Rugby League World Cup head coach for 2021, he is also making a comeback playing for the men’s national team.

He’ll fill one of the back-row spots as Brasil shapes up against Peru in the first 13-a-side rugby league contest between the neighbouring countries.

The clash will occur at 5pm Saturday (Feb 22) at Hillier Oval, Liverpool, in western Sydney.

“My last game was for Hills District Bulls in April last year when I ruptured my bicep,” says Gardner.

“I’d played in a trial a few weeks earlier for the South Sydney Rabbitohs and already decided it was going to be my last season.

“I was pretty gutted sitting in the sheds after the injury, when it dawned on me that was probably my last game.

“Nobody wants to go out that way. Especially after I’d fought my way back from a couple of serious injuries in the years before that.

“This chance to play for Brasil does mean a lot. It’s pretty special to do things on my terms and reconnect with my mother’s birthplace after everything that’s happened the past year.”

Gardner says he has “millions of cousins” still living in Brasil, split between his mother’s hometown of Aracaju in the north-east and Rio de Janeiro where her family later relocated.

It was while working in Rio that Tereza Dos Santos, Matt’s Mum, was asked to be an au pair for a Brazilian couple who had links to the navy.

When the host family undertook a visit to naval facilities in Britain, they first stopped in London, then Liverpool, then the relatively remote Barrow.

“My Mum had been in Barrow three weeks when she went to a nightclub called Manhattan’s. That’s where she met my Dad. The place still exists to this day.

“Three months after that they got married.”

The twists and turns of fate have since seen Matt play close to 200 games of English rugby league, two seasons of league in Australia, plus 30-odd games for Brasil in rugby union sevens.

However, to this day he has not represented Brasil in league, though he did represent a combined Latin America at the 2018 Emerging Nations World Championship, where he shone.

“My Dad absolutely loved me playing rugby league and he was super, super excited whenever I played union for Brasil, so I know he’d be absolutely buzzing for me representing Brasil in our favourite sport,” Matt says.

“For that matter, my Mum is pretty excited as well.

“Seeing Brasil as an emerging force in rugby league is something that blows me away.”

While all of his Brasil teammates are effectively ‘new’, Gardner has been working in the background mentoring them while unable to pull on the boots himself.

He helped coach the Brasileiros to third at last year’s Latino Nines, despite it being their first attempt at the tournament.

Gardner also has links to pioneering Brazilian playmaker Lucas Vinas Vieira, who is flying to Sydney from his hometown of Maringa, Brasil to play in this weekend’s event.

“When I was playing union sevens for Brasil, Lucas was always around the fringes and close to breaking in. We got along pretty well, so I’m looking forward to seeing him again after all these years,” says Gardner.

“Mark Jackson is another who I sort of crossed paths with in Brasil, although we were playing in different teams.

“But really, I get the most joy out of the players I’ve worked with on fundamentals like catching and passing and seeing the improvement and application they’ve displayed.

“I never expected I would love coaching as much as I do, but working with this men’s group and then being able to do the same with the women’s World Cup is going to be epic.”

Livestreaming details to be confirmed on the event page this week.