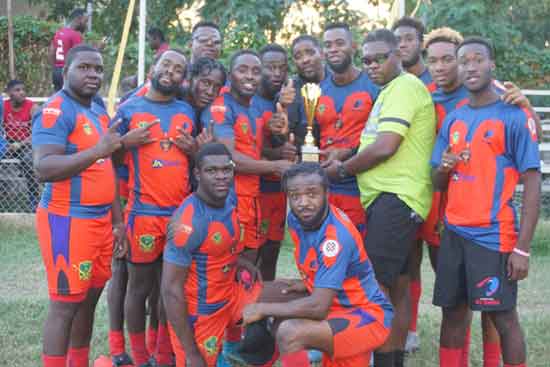 Following the group stages, Duhaney Park Red Sharks were crowned champions after defeating Caribbean Maritime University Spartans thanks to a sudden death field goal. Both teams were locked at 14-all at the end of regular time and neither could find the winner in golden point extra time, so it took drop kicks to separate them. Marvin Thompson sealed it for the Red Sharks after Kareem Harris went agonizingly close for the Spartans.

JRLA Director of Rugby Romeo Monteith said: “Nines is now a permanent part of the rugby league calendar and this is one of three open men’s tournament that will form a circuit to identify Jamaica’s best players in the short version of the sport. It’s quick which suits our guys and will act as selection for the 2021 America’s 9’s Championship and we’ll hopefully qualify for the World Cup 9s in 2022. The other two instalments will be the Easter 9s on April 4th and we conclude with the Summer Nines on May 30th.”

The National High School under 14 and under 16 championships kick off this week in earnest, joined by the historic first second season of girls rugby league.

In a first for rugby league in Jamaica, the girls’ tournament will be played under modified rules by three school, Ascot High, The Cedar Grove academy and Waterford High.

In another boost for the schools league, an innovative partnership has been struck with Australian charity ‘Dev Inno’ who have agreed to support the tournament and to provide education courses for young entrepreneurs.

Eight schools are down to compete in the Under 14 season in two groups. Group A has Ascot High, The Cedar Grove Academy, BB Coe High and Old Habour High whilst Group B features defending Champions Calabar High, St. Catherine High, Kingston College and Waterford High..

The season will culminate with Grand Finals day on March 20th.

“We have another fantastic year of High School Rugby League planned, and the launch of our girls’ tournament is an important milestone in the growth of our game.

We hope that this is the first step to our Jamaican women joining our men in future Rugby League World cup tournaments beyond our debut appearance in 2021.

We welcome Dev Inno as our first major tournament partner for the high school tournaments, and their vision for social improvement through sport matches perfectly with ours at the Jamaica Rugby League Association.”

The boys U16 tournament kicked off on January 15th, with Calabar defeating Spanish Town 34-10.  Shaquan Brown, Jelanie Barrett and Fitzroy Mcleod all scoring two tries for the winners with Bryan Williams kicking 3 goals. For Spanish Town, Damani Ford top scored with 6 points from a try and a goal, with Kevroy Mckenzie giving support with a try.