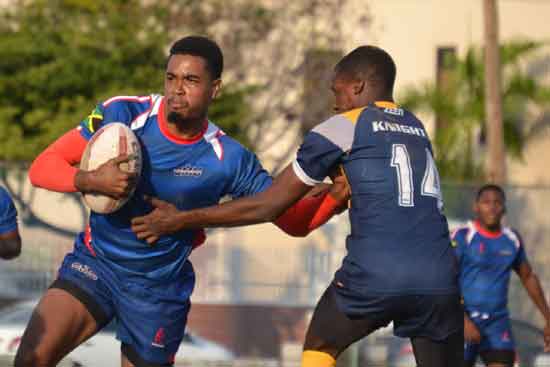 Photo: Marlon Nunes of CMU carries the ball into Contact against UTech

The 10th Intercollegiate rugby league Championship will kick off on Thursday, January 23, with 6 of Jamaica’s premiere colleges and universities partaking.

The format of the competition remains the same with all teams will playing each other twice over 10 rounds.  The top four will battle in the Semi-Finals scheduled for Saturday, April 11. The Grand Finals and Third Place will take place on Saturday, April 18.

Champions Exed Eagles will look to the leadership of national hooker Akeem Murray to guide them to a title defence, meanwhile, hard running utility Orlando Messado should feature heavily for last year’s beaten finalist, CMU Spartans as they seek to go one better. UTech Knights could be the dark horse of the competition as JRLA player of the year and prolific national try scorer Jenson Morris returns. Former four time champions Mico Crocs, still in rebuilding mode, will need former St. Catherine High playmaker Kwame Blake firing on all cylinders to avoid missing their second semi-finals in 10 years.  GC Foster Lions will look to diminutive half-back Devon Coke lead them to another title while UWI Pelicans will look to upset the apple cart behind the guile of national play maker Adrian Hall.

Intercol rugby league coordinator Marvin Thompson sees another exciting season in the making but would love to see corporate Jamaica support the competition:

“Last year featured some classic match ups and we expect the same this season, Exed and CMU have set the new standard for the competition but the other teams have shown that they are right up there as well. There are plenty national players in this competition and with places to next year’s Rugby League World Cup on the line, we can expect a very competitive season. The only the missing is a title sponsor for one of Jamaica’s best competitions.”