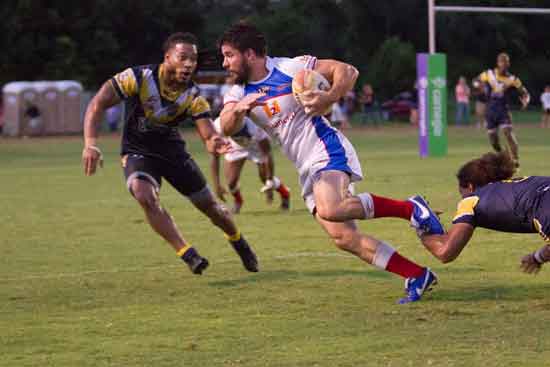 The USA Rugby League LLC has held its annual general meeting and according to reports tabled by 10 of the league’s 11 teams in attendance in Tampa, Florida, most seem to be headed in a positive direction financially.

USARL LLC chairman Danny Hanson said that from a financial standpoint, the league is now more economically viable than ever before.

“We’re now able to pay for more things,” he said. “Our income stream is up a little bit and we’re able to afford to pay for coaches and referee clinics, some of the things we weren’t able to do in the past.

“We feel that’s where we want to put our money right now, developing the frameworks.”

Moreover, Hanson said it seems like a lot of the clubs have had a resurgence in sponsorships.

“Some teams were almost done two years ago, and they’ve turned things around,” he noted. “They’re getting some sponsorship money and it’s coming along.”

One of the main items on the agenda that had been planned for discussion was whether to approve the addition of the Midwest Rugby League (MWRL) as an expansion conference this season, however, it won’t happen in 2020.

According to Hanson, the MWRL isn’t ready yet to take that final step.

“I feel bad for them,” he said. “Mike (Featherstone, CEO) is putting so much into it, he’s really trying, and it seems sometimes he takes one step forward and is pulled back two.

“We continue to support their efforts. We consider them a part of our organisation even though they haven’t formally joined as a conference. The guys are receptive to them and are really appreciative of what they’re doing and people like Drew Slover (Jacksonville Axemen, co-owner/GM) have offered to help them get set up, if they want the help.”

As for the new California Rugby League (CRL), Hanson said that while they appear to want to remain an independent setup, the fact of the matter is that to be recognized as a rugby league competition in the United States, an organisation has to join the national competition.

He said there is no “doing our own thing” because you won’t be sanctioned. Hanson said USARL is extending the olive branch and will continue to offer to help.

In terms of the proposed Texas Rugby League (TRL), he said while USARL hasn’t been contacted by anyone in the Lone Star state, the same applies.

In other developments to come out of the AGM, the former national champion New York Knights will not return in 2020. They opted to take a hiatus in 2019 because of difficulties in filling positions within the club and that break will continue into this year.

There will be at least one coaching clinic and one refereeing clinic, most likely in late March, in order for the league to certify its own Level 1, and possibly Level 2, coaches and refs so they can eventually run their own train the trainers programs.

The league plans to solicit a single source for kit for all 11 teams in 2021, while Delaware Black Foxes CEO Bjorn Haglid is currently working on a ball sponsor for all USARL domestic clubs for this season.

It was decided that there will be no Sunday games in 2020. Teams say that because most of their players have other jobs and families, having to travel on Sundays is an unnecessary and additional burden for them.

And finally, the league will look at enhancing its YouTube page in an effort to build the American rugby league product and show it to the world.

“It’ll be business as usual this year,” added Hanson.