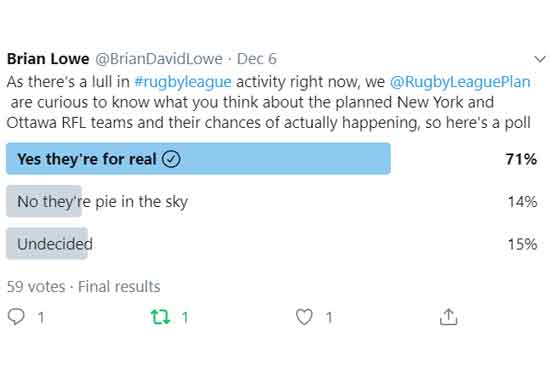 Judging by the response to a survey on Twitter conducted by RugbyLeaguePlanet, the majority of our readers see the two proposed Rugby Football League (RFL) franchises in North America as being definite goers despite there still being questions over the reality of that actually happening.

Teams to be based in Ottawa and New York City are looking at tentative start dates of 2021. The plan is for them to kick off their inaugural seasons in League One, as did the first trans-Atlantic RFL team Toronto Wolfpack in 2017.

According to our Twitter poll, an overwhelming percentage of respondents voted that yes, they believe Ottawa and NYC will follow in the Wolfpack’s footsteps, although there was also a healthy number of voters who either have not totally bought in or haven’t yet made up their minds.

In March of this year, the RFL said that although the two proposed franchises were at different stages of development, both applications were judged to have the potential to help deliver the RFL’s strategic vision.

At a special meeting of Championship and League One clubs in April, consortiums for each proposed club presented their visions and business plans for consideration.

After that meeting, RFL senior non-executive director and chair of the Championship and League One forum, Simon Johnson, said: “The clubs were in principle supportive, by a comfortable majority, of the proposals for both Ottawa and New York to join the competitions, and for the RFL board to continue to exercise its discretion to negotiate with both clubs, and to make a decision in due course.”

That decision was announced in May in a statement by the RFL.

“The application for Hemel Stags to be relocated to Ottawa has been accepted in principle, although both the RFL and the consortia have agreed that some further work is required before it can be confirmed that the Stags will be ready to start the 2020 season in Ottawa,” read the statement.

“With regard to the New York bid, the RFL and the consortium have agreed that entry into League One in time for 2020 is not achievable without placing the club under undue pressure, because it is a start-up operation without the benefit of existing operations already being in place, and due to some change in the ownership structure during the process.

“The RFL has therefore encouraged the club to work towards entry into League One in 2021.”

Perhaps the RFL sensed something was amiss because things have changed since then, certainly in Ottawa’s case, and now nothing is set in stone.

Only a few short months ago, the Ottawa team conveyed the message that it was on track to kick off in February, although in the intervening time those plans changed and the club’s proponents told the RFL it won’t be entering League One in 2020. They’re now looking at 2021, but that isn’t expected to be confirmed until the first half of next year at the earliest.

The advantage Ottawa seemingly has over New York is that it is not starting from scratch. It is a planned relocation of the former Hemel Stags club. It just happens to be a much farther than usual relocation as it involves moving the team across the Atlantic Ocean rather than just up or down the M1/A1.

In the case of the proposed New York franchise, its projected start date has been pushed back for a second time to 2021, which means there’s a higher possibility that it could lose momentum altogether and just peter out. The original plan was to start up this year.

That aside, the bid’s main spokesperson Ricky Wilby told RLP in 2018 the backers picked the big apple as their preferred location because NYC makes sense to them.

“The bid team investors have a couple of big businesses in New York which ties them in really well,” he said. “We looked at the way Toronto worked, and we thought there was a way that we could do this.

“We feel it’s a big community project that we can develop, and we can work on to generate our home fans and to create a fan base that not just loves the New York rugby league team, but also the American national team.”

The NYC bid is still on the table, and while most of our poll respondents are convinced that both teams will eventually happen, it remains to be seen what ultimately transpires with both proposed franchises.