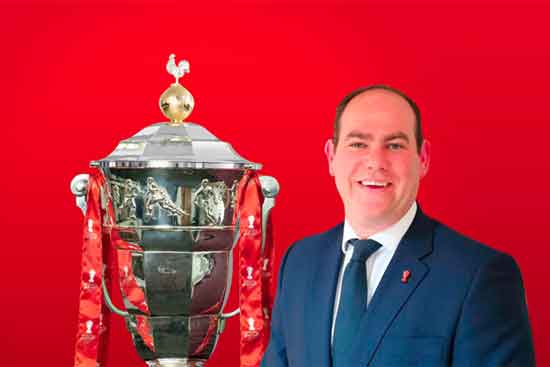 Rugby League World Cup 2021 (RLWC2021) can confirm the appointment of Robert Sullivan as one of the tournament’s independent non-executive directors, completing the RLWC2021 board.

The RLWC2021 board and executive team are focused on delivering the biggest and best Rugby League World Cup. The tournament will not only be one of the most inclusive sporting events in history but will pay specific attention to its digital connectivity – increasing the profile of Rugby League and leaving a lasting legacy.

In his previous role as Strategy and Communications Director at the FA, Robert led the England team’s highly successful off field programme during the 2018 FIFA World Cup to re-engage with the English media and public. During his tenure at The FA, Robert has also led on a range of other issues including investment into grassroots playing facilities, safeguarding and public policy.

Robert is an experienced corporate consultant, who has formerly been an adviser to a range of private and public sector clients including Microsoft, Diageo and Sky. As a lifelong rugby league fan himself, he also has a great deal of respect and passion for the sport, something that stands him in good stead as starts his new role.

Speaking on his appointment, Robert Sullivan said: “I am extremely proud to have joined the RLWC2021 board on this exciting project. The work that has already gone into making RLWC2021 an event which delivers a world class sporting spectacle, with positive, long-lasting implications has been brilliant.

“It is important to keep the impetus going, and in my new role as non-executive member of the board, I will be here to advise and work alongside the team to help them deliver the biggest and best Rugby League World Cup ever.”

RLWC2021 Chair of the Board, Chris Brindley MBE, added: “It is great to welcome Robert to the team. He has a real breadth of knowledge, both from a sporting and a business perspective, and his extensive experience will help us in pursuit of our ambitious goals.

“Moreover, with Robert’s appointment, our board is now complete, which is important as we enter a critical stage of planning ahead, in order to deliver a tournament that the whole of the country can be proud of. In having Men’s, Women’s and Wheelchair competitions we will champion inclusivity as well as leaving a lasting legacy across all aspects of the sport of Rugby League.”