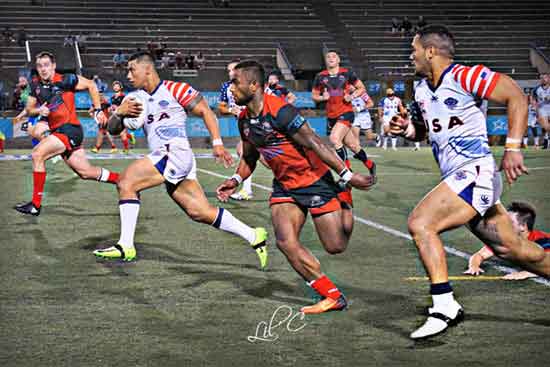 “We’re all very disappointed that we haven’t qualified, we did our best with the players we had available.”

That is how US Association of Rugby League (USARL) Inc chairman Peter Illfield summed up the feelings around the American rugby league community following the USA Hawks’ elimination from the mix for the 2021 Rugby League World Cup (RLWC).

The loss to the Cook Islands in the world playoff game means the United States will miss the next RLWC after having competed in the last two iterations in 2013 and 2017.

“It’s very difficult for developing nations to always have access to our best players,” says Illfield. “Being amateur players, with limited time off work and limited funds to travel there’s a combination of factors that reduces their availability.”

He says despite the outcome, it will be business as usual in terms of the national governing body (NGB) continuing its efforts to develop the game in America.

“The USA Hawks have a solid international agenda and we will push on in continuing to improve our world ranking, to improve our available talent and continue our search for new talent,” he says.

Illfield says that although there have been some recent disappointments, the best course of action is to look forward not backward.

“Setbacks in sport are no stranger to the experienced and dedicated. Head coach Sean Rutgerson team manager, Billy Neilson and the administration of the USARL Inc have been very dedicated to the Hawks cause … looking at many ways to improve every aspect of our preparation and participation.

“We look forward to the future and our next challenge and the opportunities to compete on the world stage. It is so very important for our domestic players to clearly see the value of the Hawks to motivate those aspirations to represent their country.

“Success drives success. Let’s keep looking forward to be successful in our next challenge.”

The USA’s failure to qualify for #RLWC2021 also calls into question what, if anything, needs to change to ensure playing standards improve in the US, as well as Canada for that matter.

Coach Rutgerson is of the opinion that in order to develop rugby league in North America, and specifically the US, there needs to be more domestic competition which would create a bigger player pool.

“With the California Rugby League coming in, hopefully they’ll get up and running and there will be more people for us to choose from,” he says. “We want to see this game develop and get better and better with better players coming in.

“Not making the World Cup makes it a little bit harder, but there will be an incentive for those players to join our competition. The more players that join our comp the better it will be.”

USA Hawks domestic captain Nick Newlin has identified a lack of funding for the game stateside as one of the major drawbacks. He also highlights the fact that the domestic competition is played in summer, meaning rugby league is played while people are away on summer holidays and it’s up against rugby union 7s, which is an issue as most league players also play union.

“My best proposal would be starting about mid-August when 7s tournaments are done and finishing mid to late October,” says Newlin.

He goes on to say that moving the season back means it would be partially played in the Australian offseason, which could be beneficial for the American game.

“The Aussie offseason could entice more (players) to come over and play with local teams.”

Canada Rugby League Association (CRLA) president Bob Jowett says he sees the Cook Islands’ victory as another indication of the strength of the game in the Southern Hemisphere versus the Northern Hemisphere, and he cites the Great Britain Lions’ recent tour results as further proof of that.

“As to what needs to be done, I believe the result confirms that the US and Canada need to develop strategies for the short, medium, and long term,” he says.

“To be able to fully compete against Southern Hemisphere teams we need to develop players who have been playing the game since they were tots (2-6 years old). Unfortunately, the push to have international success tends to take focus away from the junior game.”

“This is a key issue faced by all Tier 2 / Tier 3 nations and countries have taken different approaches,” he says.

“I don’t believe there is a straightforward answer to the conundrum, each nation has to find its own solution.

“There is much to be said for limiting the number of heritage players, however, even this is a contentious position. The US and Canada have a lot of hard decisions to make but can look at Jamaica to see what can be achieved.”

Following a 12-month period in which the Hawks finished runners-up to Jamaica in the RLWC Americas region qualifiers, lost again to the Reggae Warriors on the IRL’s designated international weekend in June and then were defeated by the Cook Islands, the USA has dropped to #18 in the latest world rankings.

America reached its highest ranking to date at #9 midway through 2014. That followed the then Tomahawks’ success at #RLWC2013.

The up and down trend coincides with a change in the philosophy of the NGB, in particular, the focus on national team selections.

Since taking over as the NGB in 2014, the USARL has preferred to draft more homegrown talent into national squads in the belief that it will encourage domestic-based players to strive for higher honours knowing that they have a chance of being selected.

Conversely, the former NGB, American National Rugby League (AMNRL), took a different view. It opted to select more heritage players believing that gave the US a better chance of success internationally, which would provide the impetus for domestic guys to lift their game in the hope of national team selection.

Meantime, Canada too has slipped in the latest rankings, dropping to #27. The Wolverines reached their highest position to date at the end of 2015 when they were ranked #13.

It was around that point in time, after the #RLWC2017 Americas region qualifiers in which Canada finished runners-up to the US, that there was a changing of the guard in the CRLA’s executive that, as was the case south of the 49th parallel, ushered in a different mindset on how best to develop the game.

While all of this was going on, Jamaica, the third player in the Americas, was quietly beavering away at improving its game which culminated in its triumph in the Americas region qualifying series a year ago that earned the Reggae Warriors a place at #RLWC2021.