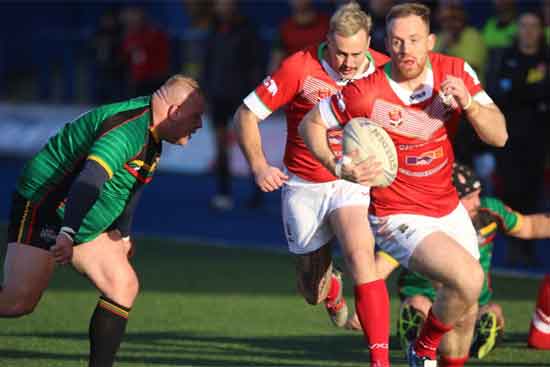 Wales Dragonhearts are hoping to bounce back from last week’s defeat to England Lions when they take on Malta Knights at Morganstone Brewery Field this Saturday (kick-off 2.30pm).

It’s the Dragonhearts’ fourth and final match of the Motorplus Autumn Series, which is celebrating 25 years of community international matches in Wales, and the Welsh know they’ll find in tough against a Malta side that is expected to contain Wigan Warriors’ Super League star Jarrod Sammut.

It’s the first time that Wales have faced Malta in any form of rugby league and Newbury knows the challenge his side will expect if they’re to secure a 100% home record in 2019.

He said: “We’re going into the final game of the Motorplus Autumn Series and it’s an important one.

“It was a disappointing performance last week where we just didn’t turn up and the boys have been challenged with a reaction this week.

“Malta will be a stern test and we need to be firing on all cylinders to compete. To do that we’ve picked the form side from the series this week and we are excited to get out there now.”

Sammut’s inclusion for Malta will give them strength as the influential half-back will surely marshal them. The former Super League Crusaders favourite, scoring 18 tries in 35 appearances for them and has now over 200 appearances in the UK professional game.

He’ll be joined in the Malta side by New South Wales Premiership-based Tyler Cassel, who played for Scotland in the 2016 Rugby League Four Nations, and his brother Kyle.

Sammut is still in the Betfred Super League, playing for Wigan Warriors, whilst the Cassels are with Sydney’s Blacktown Workers Sea Eagles. The three players were pictured at Sydney Airport on Tuesday as they began their journey to Wales.

Nine of Malta’s named 19-man squad has been selected from this year’s domestic Origin series on the islands that pit Maltese born players (Local Red Knights) against Maltese expats or residents (Expat Black Knights). There are also seven British-based community game players which include former Cardiff Demons and UWIC centre Paul Bartlett, who now plays for the RAF.

Tickets for the encounter – Wales Dragonhearts v Malta Knights – priced at £5 per adults, free for children, can be bought by going to https://wrl.wales/tickets.