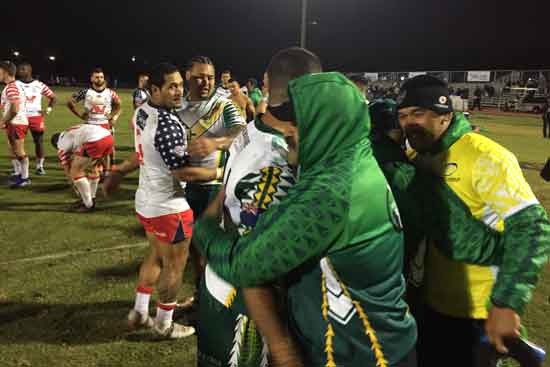 As we now know, the Cook Islands clinched the 16th and final berth for the 2021 Rugby League World Cup (RLWC) by downing the USA Hawks 38-16 in the world playoff game in Jacksonville, Florida, at the weekend.

As it turned out, it was the last hoorah for the US, which had competed at the two previous World Cups in 2013 and 2017 and means they now have to wait another four years for the whole qualifying process to start over.

That’s assuming of course that #RLWC2025 doesn’t end up being held in the US and Canada, as seems unlikely, following the International Rugby League (IRL) decision to put it out to tender again.

Conversely, for the Cook Islands the win means they will be back at the RLWC after missing out in 2017. Their previous appearances were in 2000 and 2013.

As you might imagine, the two head coaches have differing views on what transpired on Saturday.

“It was exactly as we expected, a tough and tight physical contest where the final result flattered us somewhat,” said Cook Islands coach Tony Iro.

“The US put us under a lot of pressure, but I was very proud of our resilience and spirit especially when we were down to twelve men.

“We are very pleased with the result as this was only our second game together in over two years. We look forward to building and growing as a group over the next two years.”

For US head coach Sean Rutgerson, it was a disappointing end to a campaign that he embarked on in 2018 after taking over the reins from former Hawks coach Brian McDermott.

“It’s a hard situation as we really played okay,” he said. “We took it to them.

“I don’t think the scoreboard reflects the game. I’m disappointed we lost of course but am happy with most of the performance.

“Against a fulltime squad, we played well. A couple of errors helped them.”

The Kukis led narrowly 12-6 at halftime on Saturday and the Hawks were still in it at that point, but the second half was a different story.

The Cook Islands controlled that stanza, and in doing so, punched their ticket to #RLWC2021.