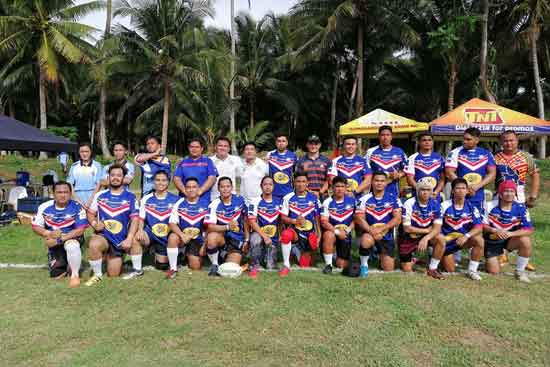 November 9, 2019, a day to remember when Rugby League history was made on several occasions in Baler, Aurora Philippines.

Yes, it was a tough day for our Tamaraw team who played their first game on home soil since the 2013 Asia Cup match in San Narciso where they were victorious over Thailand with a team comprising of international heritage players. This time around would see a different setup, the Tamaraws team was made up of wholly domestic (except for 2) players from the PNRL domestic competition in the Manila Storm, Nth Luzon Hunters and Cavite Tigers teams.

It was a shaky start for the Tamaraws right from kick off, with a few nervous passes in their 10 they handed ball possession to Japan which set the mood for most of the first half. Japan’s strength on their edge exploited the Tamaraws lack of numbers making for some easy points in the first half. The Tamaraws just couldn’t break the Japanese line enough to get an opportunity to score. The first half ended with Japan scoring 38 unanswered points.

The second half started differently as Japan were held in their 20 with some strong defence from the Tamaraws. A few ball handling errors and missed tackles due to the humidity saw possession handed back to Japan who took advantage of their opportunities. It wasn’t until the 55th minute that the Tamaraws broke the Japanese defence through Liam Johnston’s powerful run at the halfway line with nothing but Japans full back to beat. With a sweet sidestep Liam got Philippines first points of the day. This got the crowd fired up as they chanted, “We are Tamaraw’s, we are Tamaraw’s”, they seemed to ignore the score board and just wanted to be loud and proud. Unfortunately, the game ended with Japan victorious (74-4) and claiming their right to be the new 2019 Asian Champions.

It was an amazing performance by the Samurai’s who should be proud as the Filipino fans of Baler embraced them with open arms. It’s an experience we hope they will never forget and hope the Samurai’s will be back in Baler soon for their turn to defend the Asia cup.

Looking back at this event, it was nothing but a success. I’ll revert to my opening statement, “History was made on several occasions in Baler”. Let’s take a closer look at these.

The home-grown Tamaraw team – this is an historic team, the Aurora field, known as the Field of Dreams, is the beginning of their dreams to establish “the Greatest Game of All” in the Philippines.

Never has a Tamaraw National team been assembled purely from domestic home-grown players. The PNRL could not be prouder of these players, the experience they gained from playing a team like Japan will only improve them as players and individuals making Rugby League in the Philippines bigger and stronger. I see the loss against Japan as a minor setback compared to the major gain for the Philippines Rugby League, the future will only get brighter from here.

First female Rugby League touch judge – Carla S. Gestiada a certified referee and rugby player for the Makati Lady Chiefs and Manila Storm supporter approached me about being given the opportunity to be part of this historic Rugby League event in Baler. Quoting our conversation, “Hi Kuya Rey, I’m just going to ask if I can travel with the team to this event so I can be a touch judge?”. I’ve known Carla for some time now and it was an offer I could not refuse.

We hope to see more female officials follow in Carla’s lead especially in 2020 where the NSW Referees Association will be investing their efforts in the Philippines to train up and certify our domestic players.

Rugby League International in Baler – in a province known only for its surfing, Baler has very little sports to offer. This Asian Cup match was the first Rugby League International to ever be played in Baler against two of Asian teams, it’s an enormous achievement for the province and a huge effort by the organisers who had less than a month to set it up. The Field of Dreams, situated in an area with its spectacular views of the surrounding mountains and its beautiful coastline, it’s no wonder sponsors and promoters were eager to grow and develop the sport here, this match has surely kicked off something big.

The event was nothing but a success, with 1000 in attendance; PE teachers and children from every local school, the Police and Army spectating, Baler has certainly been given the taste for Rugby League.

Meetings were held with Baler organisers during the weekend to discuss growth and development for rugby league in the province which includes:

–        Rugby League clinics for the local children and community

–        Possibility of Australian based teams\players appearance

PNRL VP – Reynaldo Nery – “I’m excited about the endless opportunities here; Baler is an empty cup which needs to be filled and we are committed to help the organisers grow and develop the sport in this province”.

Lastly, the PNRL would like to thank Joseph Cole and Neil Pickford of the Aurora Rugby Football Club for preparing and organising this Rugby League event, from the field maintenance to the supporters and the generous hospitality shown towards Japan and the Philippines during our stay. The finer details also need to be acknowledged such as the player mascots especially for the Philippines, where we were proud to be led out by an Indigenous child from the province. Thank you once again.