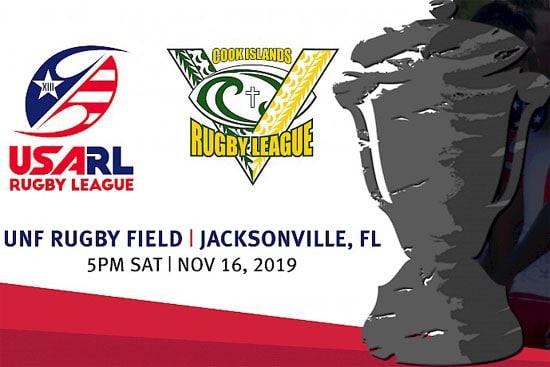 It all comes down to one last game this weekend. Will it be the USA Hawks or Cook Islands Kukis who clinch the final qualifying berth for the 2021 Rugby League World Cup (RLWC)?

All eyes around the rugby league world will be keenly focused on Jacksonville, Florida, on Saturday for this make or break contest.

For the Hawks, this match has been circled on the calendar for the last 12 months after they came up short against Jamaica in the RLWC Americas region qualifying series decider. It was their first loss to the Reggae Warriors since they started playing each other in 2009, and for them, it couldn’t have come at a worse time.

In terms of the year-long build-up to Saturday’s showdown, the US has had minimal international game time. The Hawks played in, and won, the inaugural Americas Rugby League Nines tournament in Toronto in May, then faced Jamaica in Kingston on the designated international weekend in June, a game they narrowly lost, before competing in the RLWC 9s in October.

By the same token, the Cook Islands have had just as limited a build-up. They played and beat South Africa in a RLWC inter-region qualifying game on the international weekend which put them into Saturday’s repechage matchup. They also competed at the World Cup 9s in Sydney.

The Kukis’ squad arrived in Jacksonville on Sunday afternoon, giving them a full five days to acclimatise and make their final preparations for the big game.

Their squad contains a number of players who have NRL and English Super League experience, most notably Alex Glenn (Brisbane Broncos), Brad Takairangi (Parramatta Eels) and Anthony Gelling (Warrington Wolves), something not lost on US head coach Sean Rutgerson.

“It makes a massive difference with guys with that much experience in your squad,” he says. “Those guys are used to playing at a certain level and having a tough grind, whereas most of the American guys, and no disrespect, but we play a game over here that’s at a lower level with a lot less intensity, so it’s a big step up for them.

“When you’ve got NRL players in there to lead the way, it makes a massive difference. We don’t have too many of them, so it makes it a bit tougher for us.”

Rutgerson points out how much of a difference NRL player Ronaldo Mulitalo (Cronulla Sharks) made to the Hawks’ team at the 9s World Cup.

The coach goes on to say there are some NRL players who are eligible to play for America, so USA Rugby League (USARL) will need to make a decision at some point whether to include them in the national team mix as was the case at the 2013 RLWC when the previous national governing body opted to do so.

Rutgerson says since assuming control of the game in the States in 2014, the USARL’s philosophy has been to pick as many Americans as possible in Hawks teams and still remain competitive believing that is the best way to grow the game in this country.

He says if homegrown players don’t think they have a chance of being selected in the national team, they could quite conceivably lose interest in rugby league.

“You can totally understand that,” he opines.

Saturday’s #RLWC2021 final qualifier is set for a 5pm kickoff (local time) and will be played at UNF Rugby Field, the home ground of the USARL’s Jacksonville Axemen. It will also be livestreamed on the Americas Rugby League Facebook page.