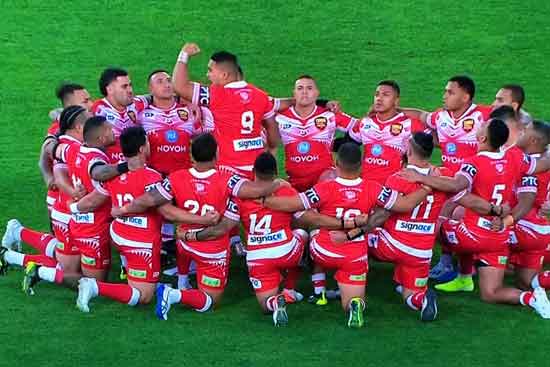 The Tonga Invitational XIII has pulled off one of the greatest upsets in International Rugby League history, defeating world champions Australia 16-12 in an enthralling Test match at Eden Park.

The heroic Tongan side dominated the opening exchanges, while they overturned a six-point halftime deficit as the shell-shocked Kangaroos were trampled underfoot by a red-and-white stampede.

The Tongans’ historic boilover was the climax of a momentous Triple Header in Auckland that underlined the burgeoning state of the International game. Fiji Bati kicked off proceedings with an emphatic 44-18 victory over Oceania Cup Pool B favourites Toa Samoa, before the New Zealand Kiwis won a gripping series opener against the Great Britain Rugby League Lions 12-8.

But the day ultimately belonged to the Tongan Invitational XIII, who planted the island nation’s flag at the top of International Rugby League’s highest peak by defeating world champions Australia for the first time and sent the now-customary sea of red in the stands into raptures.

The 16-12 triumph over the Kangaroos – in what surely ranks as one of the greatest Test matches of all time – gives the Tongans a cleansweep of wins over the ‘big three’, following on from their groundbreaking 2017 Rugby League World Cup win against the Kiwis and last weekend’s boilover against the Lions in Hamilton.

Australia, who had never previously lost to a Tier 2 nation, clinched the Oceania Cup on points differential, with the Kangaroos, Kiwis and Tongans all finishing with one win apiece. The Tongan Invitational XIII would have needed to win by 22 points to grab the trophy – but the euphoria of this result means more than anything a piece of silverware could provide.

“It’s been a long journey for us, we’ve come a long way. We weren’t too sure we were going to get a game this year but full credit to the fans out here, they’ve supported us since day one.

“But man, it feels good to beat all three Tier 1 nations.”

Enthusiastic support of fans from all six countries created a festival atmosphere at Eden Park, while the time-honoured expressions of cultural and national pride before each encounter added to the enormous occasion. Toa Samoa’s Siva Tau, the Bati’s hymn ‘Noqu Masu’, the Kiwis’ haka and the Tongans’ Sipi Tau stirred pre-match emotions and set the tone for three passionately-fought Internationals.

Camaraderie amid the competitiveness was another standout feature of the day, despite what was at stake for each team.

“The atmosphere created by this wonderful, passionate crowd and the outstanding quality of all three Tests more than matched what was a momentous occasion for our code.

“Australia thoroughly deserve their capture of the inaugural Oceania Cup, but the Tongan team indisputably cemented their place among world Rugby League’s heavyweights. What an incredible victory, one no fan of the game will ever forget.

“New Zealand and Great Britain turned on a classic arm-wrestle, real edge-of-the-seat stuff – and no doubt the Lions will be desperate to square the series in Christchurch.”

The Tongan Invitational XIII rattled Australia from the outset with their physicality and willingness to keep the ball alive, which led to captain and fullback Will Hopoate scoring the first try in the 20th minute. But the Kangaroos regrouped and headed into halftime with a 12-6 lead after tries to Jack Wighton and Paul Vaughan in quick succession.

The Tongan side regained the ascendancy with an explosive start to the second half, however, with Michael Jennings crossing out wide and giant forward Tevita Pangai Jr muscling over in the 53rd minute in what would be the last scoring play of the match.

Chances to seal the result slipped agonisingly out of reach for the Tongans, but their intensity across the park and gutsy scrambling defence – particularly in the pulsating final minutes – kept the Kangaroos’ superstars at bay.

“It’s a proud moment for our small country. It’s unreal. This is up there with winning a Grand Final.”