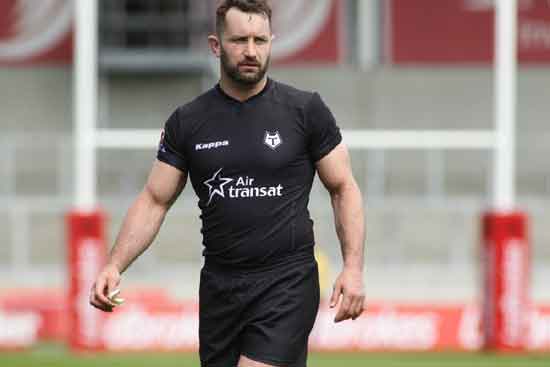 Heading into his 17th professional season in 2020, Beswick will be one of the most experienced players to ever pull on a Thunder shirt, with more than 400 games played in his career to date.

Making his Super League debut in 2004 with Wigan, Beswick played at the top level for two years before establishing himself as one of the most competitive and creative hookers at Championship level across a superb ten-year stint.

As well as having a wealth of experience at club level the 34-year-old is one of the most capped internationals for Ireland with 26 caps to his name, the latest of which came during last weekend’s 42-8 win over Spain as part of this autumn’s Rugby League World Cup qualifiers.

A player who has proven to be an exceptional leader both on and off the field through a high level of professionalism, his tremendous work ethic often sees him top the tackle count and he’ll undoubtedly be a key figure in Thunder’s
2020 campaign.

Having worked with Beswick as assistant coach at Toronto and played alongside him at Widnes Vikings, Thunder head coach Simon Finnigan is looking forward to reacquainting with his old team-mate on Tyneside in 2020.

Finnigan said: “We knew Bob was available towards the end of the season and he’s obviously a player who I have known for quite a while. He is a quite an experienced player so he knows how to play the game and he has played at the level we areat, so that won’t phase him and he will understand the obstacles that brings.

“He will add quite a lot to our group and I am really excited about him coming in because through speaking to him, he’s desperate to get going so we will have an energised Bob Beswick which is a good thing.”

Beswick himself is also looking forward to joining the Thunder camp and will be hoping League 1 title-winning experience gained with Toronto back in 2017 can help Thunder to a successful season in the new campaign.

He said: “I’m really excited to be joining Newcastle and working with Simon again. I’m looking forward to contributing to a passionate and committed group and working towards a successful season in 2020.

“That will take hard work and I can’t wait to get started in pre-season. I’m also keen to explore a great city and meet some new faces along the way”