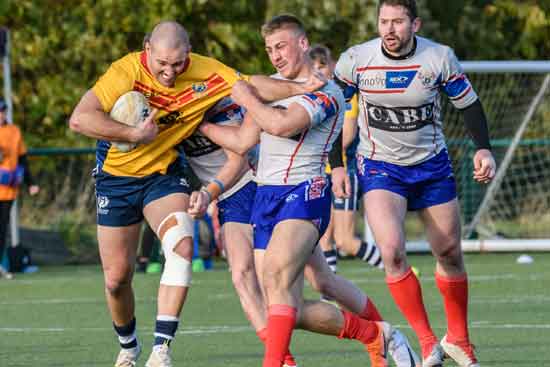 Scotland, aiming for their fifth qualification, have one foot in the 2021 Rugby League World Cup tournament after an overwhelming 15-try victory over Serbia at the Lochinch Ground in Glasgow.

The outcome was effectively decided within the opening 20 minutes, winger Will Oakes posting his third try – and his nation’s seventh in a blistering start – by quarter time, the visitors barely putting together a concerted attack in that time.

Scotland head coach Nathan Graham was impressed by his side’s clinical finishing but acknowledged that intensity was lacking in the second half.

“We began really well,” he said. “We were unsure about the quality of their squad knowing that they had several heritage players, and it was a bit uneasy in the changing room beforehand. But our start to the game was amazing, completing the first six sets and scoring a try off each one, which effectively won the game and helped us settle down.”

Graham, covering for Chris Chester and Jon Duffy, added: “In the second half, it became a bit scrappy and it was difficult to maintain the same focus after the break.”

The Bravehearts, in yellow heritage shirts celebrating 25 years since formation, made the perfect start, Oakes fed into the corner inside 35 seconds, Ryan Brierley with the extras.

Ben Kavanagh’s break allowed Alex Walker to go between the posts, Brierley adding the extras and, on the sixth minute, Oakes claimed his second in identical fashion to his first on the overlap out wide.

Two minutes later, Brierley did it all himself, sprinting clear from half way and making it 22-0, then turning provider to position Nick Glohe across as the Bravehearts ran riot.

Kavanagh, winning his 20th cap, was proving near unstoppable on the fringes, the back rower releasing David Scott for his opening score and, when Serbia spilt possession, Oakes swept it up to speed clear and complete his hat trick from 70 metres, Brierley converting.

Scott posted his second, cashing in on a Luke Douglas bust as the visitors were unable to hold the home forwards, especially after James Mirceski was sin-binned for a high tackle on 25 minutes.

Temporary respite for the Serbians was ended just after the half hour when impressive debutant Calllum McLelland crossed from dummy half close in, Brierley’s goal taking the lead to a half century.

The scrum half’s pace in midfield brought him a second touchdown that he also goaled, making it 56-0 at the break.

Seven minutes into the second half, McLelland was again the instigator, easing Walker in for his brace but Serbia showed greater resilience as the half progressed.

Kavanagh deservedly crossed taking advantage of another Oakes break out wide just before the hour, Brierley landing his tenth goal from the touchline.

Tempers flared after a late hit on Adam Walker, Ilija Radan sin-binned and, soon after, Rajko Jankovic and Danny Addy were  yellow carded for an off the ball incident.

With additional space, McLelland was again involved in Ben Hellewell’s score on the right, and Scott competed his hat-trick to become the joint top try scorer in Scotland’s history.

Dan Turland completed the scoring when he crashed over from close in, Brierley converting and finishing with 34 points.

Serbia, a late inclusion for Russia in the final qualifiers, showed new head coach Stuart Wilkinson enough after the break for him to build on, despite the hammering.

“Obviously, we’re disappointed with the outcome but everything I’ve seen today can be fixed,” he noted. “In a lifetime of coaching, I’ve been in worse situations and able to turn it around. What isn’t fixable is attitude and the players tried to the bitter end. I was very proud of their effort and what they tried to do against a more experienced side.”