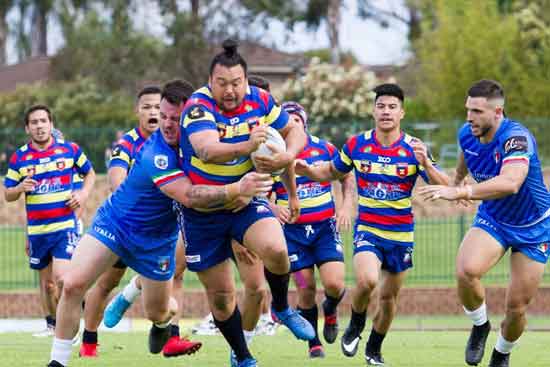 By Reynaldo Nery, Photo: Rez Phillips breaking through to score a try for the Tamaraws (Credit: SOURA)

Saturday 19th of October,  will go down in the Philippines Rugby League history books for a number reasons, not just for fielding 3 teams against a proud Rugby League nation, but for the bravery and commitment from players, not only representing themselves, but their families and a proud passionate nation.

The Philippines National Rugby League (PNRL) would like to thank the Forza Italia Rugby League (F.I.R.L) for the invitation to play our teams and we wish them well in their world cup campaign.

Straight from kick off you just knew this U16’s encounter was going to be a good one.

The Italians scored first through Joe Inzitari’s after 15 minutes, but Junior Tamaraws leveled up at 4-all through our flying center Mhalikai Mercy, who was air born when the ball touched down.

The Philippine defense held solid as the Italians threw everything in attack. The scores locked even with a try apiece at halftime.

The Italians opened the second half with a well worked try up the left-side corridor that featured a sweet delivery to the winger from five eight Robbie Tocco.

A barnstorming kick return from the restart courtesy of Vince Scotti saw the tall Azzuri back-rower fly up the sideline glory bound only to be slowed down and gathered in some desperate cover.

14-10 behind the Philippine lads looked to be warming to the task and with 13 minutes left on the clock gun halfback Aaron Kurnoth found his way to the line to convert his own try and take the lead for the Junior Tamaraws for the first time in the match.

The game was intense going into the final minutes only to see a highly contentious knock-on call see a scrum feed deep in the Tamaraws half awarded to the Italian boys who capitalized from it to score a converted try.

With 3 minutes on the clock Italy held on for the tightest of tight victories but the Under 16’s Junior Tamaraws & their coaching staff -headed by our Gold Coast based Regional Junior Development Head, Daniel Price was proud of their first up efforts.

The Tamaraws Under 18’s were also up for the challenge against the Italy heritage team despite having only 1 training session as a team.

Lead defiantly by Captain Brandon Racoma-Ngata the out-gunned Philippines squad held their own for most of the match, trailing just 8-nil at the break.

Although a much smaller squad, the Tamaraws defied the Italians’ size advantage with spirit and pride, holding their own in the physicality department.

Unfortunately, the inexperienced Philippines players were often caught short in the outside backs against a well drilled Italy squad.

A dominant last quarter saw the Italian Heritage side put on four last quarter tries in the hot midday weather, beating their less experienced Philippines opponents 26-nil. And rightly deserved their Prop-Forward came home with best player on the Italian side.

At 2.30pm once again the Tamaraws lined up, hearts pumping and chest heaving with pride, as the Philippines anthem played out. Although small in stature, the Tamaraw players grow an extra foot when it comes to representing their motherland, so the scene was set for the Tamaraws first international match since last year’s 2018 Emerging Nations World Championships.

The game started off in Italy’s favour with the Tamaraws knocking on in goal in the 2nd minute of play allowing the Italians a try beside the posts.

However it wasn’t long before the Tamaraws and their vocal supporters had something to cheer about, some great lead up work, followed by a try to half back Ryan Clarke and the following conversion left the game tied up at 6 all after 8 minutes.

It didn’t stay locked up for long because 5 minutes later Italy were in again, with a successful conversion making it 12 to 6 after 13 minutes.

4 minutes later some great powerful running by the inspirational Rez Phillips saw him plant the ball next to the uprights, keeping the Tamaraws in the game, after 18 minutes it was 12 all, with attack clearing dominating.

3 minutes later Italy were in again and converting making it an 18 to 12 game, this was turning into a great attacking game.

Then finally we saw some defense with sustained pressure from the Philippines finally being rewarded in the 31st minute with a try to winger Jhun Cortez to bring the score to 18-16 with an unsuccessful conversion.

That looked like being the score going into half time, when the Philippines knocked the ball on with 30 seconds to go before half time, only for the Italians to score right on half time, a real coach killer.

Never the less the Philippines boys came off knowing, 1 try and they would be back in it.

The 2nd half started the same as the first, a Philippines error resulting in an Italian try to take the score to 26-16. And although the Tamaraw’s showed some hard hit defence, our attack couldn’t penetrate the Italian line. Italy ran away with a 44-16 victory to take the trophy.