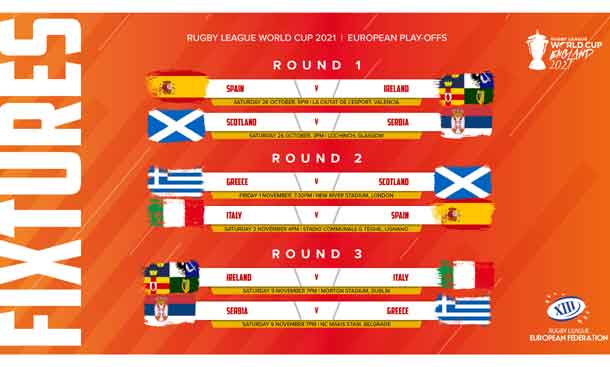 The match day squads have been confirmed for the first round of games in the final European qualifiers for the 2021 Rugby League World Cup.

Next Saturday (26 October), Spain face Ireland in Valencia (5pm kick off) in Pool A, Italy completing the group, and Scotland host Serbia in Glasgow (3pm) in Pool B, Greece the other contenders.

The top two nations in each pool will appear in the final tournament in England.

Spain – like Serbia and Greece – are looking to qualify for the World Cup for the first time and have already progressed further than in previous qualifying tournaments, although their squad is arguably the most inexperienced.

Full back Daniel García commented: “I’m excited to go into these games and show the world what we can do. We will be considered as the underdogs which we will use to our advantage, there’s a real buzz in the camp and we all can’t wait to get out there and put on a show. For me personally, it means the world to me being here playing for my country.”

Ireland include Ronan Michael, who has just signed his first professional contract with Huddersfield Giants from Longhorns, whilst Tyrone McCarthy comes into the games fresh from competing in the Super League Grand Final with Salford.

With a decade of service to the national team at senior level – and captain of the Ireland U19’s at the first European Championships in 2006 – McCarthy is looking forward to the challenge ahead. “It would be great to secure a place at RLWC2021,” he said. “We know it’s going to be tough playing Italy and Spain but we are confident. There’s is no better feeling than representing your country on such a stage and it’s one many of our younger players are eager to experience, I really can’t wait.” 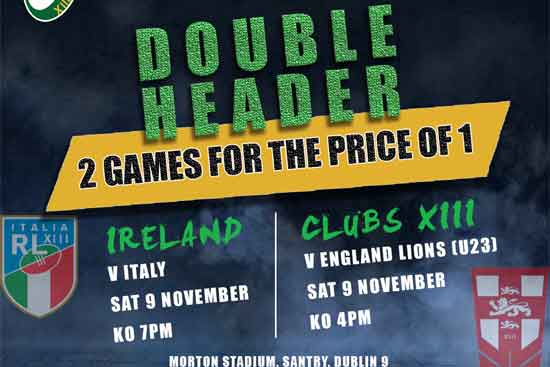 Rugby League Ireland are hosting the Rugby League World Cup qualifier Ireland versus Italy in Morton Stadium, Santry, Dublin 9 on Saturday November 9th with kick off at 7:00pm.  This is the only fixture of the qualifiers that will be held here in Ireland.

On the same day with a 4:00pm kick off Ireland U23s will face the England Lions U23s.

This doubleheader will showcase the best of Irish Rugby League talent.

We hope to see a big crowd at this event as the sport is really gaining momentum in Ireland.  It promises to be a great day out with Adult tickets at €10 and under 16s go free.  Pay at the gate or

Tickets can be purchased online at: https://admin.sportsmanager.ie/sportlomo/registration/event-registration/index/1657

His Salford team mate Alex Walker lines up for Scotland, who will also be looking to half back prodigy Callum Mclelland, the Leeds youngster taking Featherstone to the recent Championship Grand Final on dual registration.

Bravehearts’ captain Dale Ferguson noted: “It’s always an honour to pull on the tartan and I’m looking forward to playing against two tough opponents. We desperately want to qualify again for the World Cup and will be doing all we can to make sure that happens.”

Serbia replace Russia in the qualifiers and are under a new coach in vastly experienced Stuart Wilkinson. They include six players from Red Star Belgrade who have just won their third consecutive Balkan Super League title.

Skipper Stevan Stevanović claimed: “Having a new head coach with such a background has practically changed everything in our team. Stuart’s approach was definitely something new for us. He has brought a lot of knowledge and motivation meaning we are much better prepared both tactically and physically. We expect a lot from ourselves and we are hoping that we will prove it on the field.”