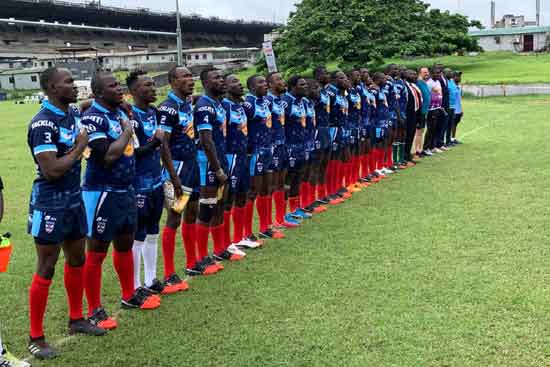 The Cameroon rugby league players have returned home after one of the most courageous and arduous journeys of any international sporting side in recent times.

The international debutants have just taken part in the Middle East and Africa Rugby League Championship, staged in neighbouring Nigeria and, in a bid to keep costs to a minimum, travelled by bus on an eight day return coach trip which involved attempted robbery, guns being pointed at them, unsanctioned payments being taken at unofficial check points and the team being arrested.

Thankfully the men’s team played their two scheduled international games and everyone returned home safely to their families.

Cameroon’s first game against Morocco was scheduled for Wednesday 2 October and the team set off on the Friday before from North Cameroon. After being stopped at fifteen check points, sleeping and eating on the bus and travelling for nearly four days, they arrived two hours before kick-off. The team changed into their kit, loosened up and then gave a colossal defensive display before narrowly losing 8-4.

Three days later, they faced Ghana, going down 10-4, however their entire team were hailed heroes by the other participating nations and event organisers. They left at one in the morning after celebrating with the other teams, in a journey which again took four days. On the way home the team was arrested at a check point due to having no money to pay unexpected fees and once during the night they had to fend off potential muggers who tried to get onto the bus as they slept.

Carol Manga, Cameroon general manager, travelled with the team and said: “We received support from our friends across the world, however not enough to secure flights so we took a bus. Travelling this way is a struggle however also has so many positive aspects as we forged a great bond. The players pushed themselves to see their dream come true and play international rugby league. I’m so proud of all the team.”

RLEF general manager Chris Thair added: “This is a remarkable story which typifies the commitment towards rugby league in Africa and the Middle East. We wish to offer further support to the nations however cannot do so without the support from businesses and the international community.”