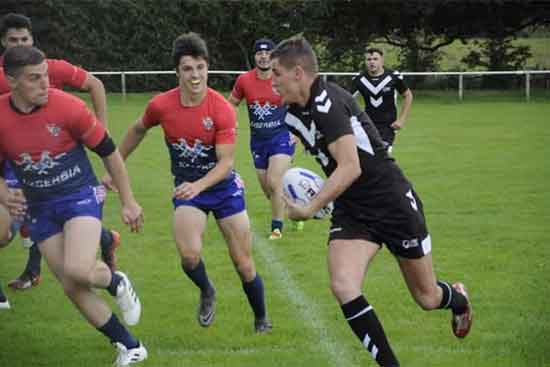 The final round of the European qualifiers for the 2021 Rugby League World Cup (RLWC) are set to get underway later this month.

Pool B will see Scotland face off against Serbia and Greece, while in Pool A, Ireland will go up against Spain and Italy. The top two countries from each pool will go through to the RLWC in England in two years’ time.

Following a decision by the Rugby League International Federation (RLIF) in August, Serbia has replaced Russia in Pool B after the Russians opted to withdraw as they are in the throes of restructuring their domestic game.

Given Serbia’s late inclusion, RugbyLeaguePlanet thought it would be interesting to get a Canadian perspective on their prospects given that Canada was the last nation to play the Serbs in a Test match. The Canadian men’s and women’s national teams undertook a history-making dual tour of Serbia in September.

The tour finished with the Wolverines squaring off against Serbia in their final match, a game won by the home team. As such, we asked Wolverines’ head coach Ben Fleming for his take on how he thinks Serbia will fare and whether the result in Belgrade was a fair indication of the Serbs’ relative strength.

“I’d like to think so,” he says. “They had all their best domestic players available, and a loud home crowd, and from what I saw I think they are strong. I would think they’ll only be stronger with the inclusion of their overseas players.”

The Serbs named their train-on squad at the weekend which includes several NRL players, others from the Intrust Super Cup and New South Wales Cup, as well as another who plays in the Rugby Football League’s (RFL) League 1 competition.

First up for Serbia in their Pool B fixtures will be Scotland in Glasgow on October 26 and the Canadian head coach thinks they stack up well.

“I think they are in with a fighting chance although playing away from home might be different for them,” Fleming tells us. “Their speed around the ruck was quite impressive and that can be where it’s won or lost, so if they can get early momentum then I think they could dominate.”

That said, however, as it will be a home game for the Scots, he says Scotland should probably start as favourites.

“Yeah they’ll be tough to beat,” Fleming continues. “They have some good players that are well experienced. As host you always have familiarity and home ground support as well.”

In their final game, the Serbs will host Greece in Belgrade on November 9.

The Greeks have been dealing with their own ongoing internal governance issues lately, which resulted in the RLIF switching their home game against Scotland from Athens to London.

So, all things considered, Fleming is of the opinion that Serbia should be considered a genuine chance of progressing.

“I think with international footy it largely depends on player availability,” he adds. “Whether that’s through injury, suspension, released from professional contracts, individual player finances and their work commitments. It all plays a part.

“If all teams are at full strength, I think Serbia are very well placed.”