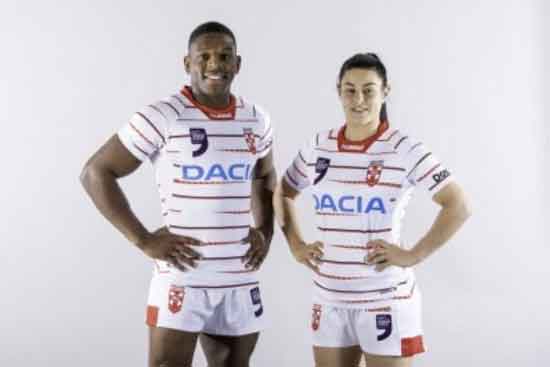 James Graham will lead England in the Downer World Cup Nines in Sydney later this month – and is one of 11 members of the 16-strong squad who has also been selected for the four-match Great Britain tour of New Zealand and Papua New Guinea that follows.

For the first time, England will field Men’s and Women’s teams in the same Nines tournament, which will be played at the new Bankwest Stadium on October 18 and 19, and covered extensively by Sky Sports.

England’s Men have been drawn in a qualifying group with Wales, France and Lebanon, with only the winners progressing to the semi finals.

England Women, who announced a 16-strong squad in August, will play in a four-team tournament with Australia, New Zealand and Papua New Guinea, with the top two in the qualifying group going straight to the final.

Graham, the 34-year-old St George Illawarra Dragons prop who won five Great Britain caps in 2006-7 and first captained England in 2010, is joined in the Nines squad by five other Australia-based players: his Dragons team-mate Gareth Widdop, who will join Warrington next season; Elliott Whitehead and Ryan Sutton of Canberra Raiders; the Sydney Roosters wing Ryan Hall; and the South Sydney prop Tom Burgess.

Widdop, Whitehead, Hall and Burgess have also been selected for the Great Britain tour.

The 10 players based in the Betfred Super League in the Nines squad come from eight clubs, including Wigan’s George Williams, who has been selected following the Warriors’ defeat by Salford in Friday night’s semi final. Players from the Grand Finalists, Salford and St Helens, were not considered, as the squad will fly to Sydney next Saturday morning.

Clark, Hughes, Trueman, McGillvary, Williams and Connor have also been selected for the Great Britain tour.

Tomkins, Lyne, Handley and Watts have been placed on standby, with the full 24-man touring party to be announced on Monday week, October 14, after the Betfred Super League Grand Final.

A number of other players, including the Canberra pair of John Bateman and Josh Hodgson, and Warrington’s stand-off Blake Austin, were not considered for the Nines because of injury, but are expected to be available for the Great Britain tour.

A limited number of these jerseys are available for purchase from https://shop.rugby-league.com/

Blake Austin has been called into the England squad for the Downer World Cup Nines in Sydney, replacing his Warrington Wolves team-mate Jack Hughes.

Hughes has a groin injury, although he remains hopeful of proving his fitness to join the four-match Great Britain tour of New Zealand and Papua New Guinea which follows the Nines.

Austin, who was born in Australia and has made a major impact in the Betfred Super League since joining Warrington from Canberra Raiders last winter, made himself available for England and Great Britain earlier this year after proving his eligibility through his family lineage.

Hughes, who captained England Knights in Papua New Guinea last autumn, was one of 11 members of the England Nines squad who have also been selected for the Great Britain squad – with the remaining 13 to be named on Monday, after the Betfred Super League Grand Final.

England Women have also lost a member of their 16-strong squad for the four-team Women’s Nines competition that will run alongside the men’s at the Bankwest Stadium.

The Leeds Rhinos forward Shannon Lacey has been ruled out after suffering a head injury during last Sunday’s dramatic victory at St Helens in the Betfred Women’s Super League semi final – meaning she will also miss Friday night’s Grand Final against Castleford Tigers at the Totally Wicked Stadium, although she remains hopeful of recovering in time to join England’s two-Test tour of Papua New Guinea later this month.

England hope to announce a replacement for Lacey in the Nines squad shortly, depending on securing visa clearance.

Both the Men’s and Women’s squads will fly to Sydney on Saturday, and play their first matches next Friday [October 18] before the bulk of their competitions are played on Saturday October 19 – with all matches shown live on Sky.