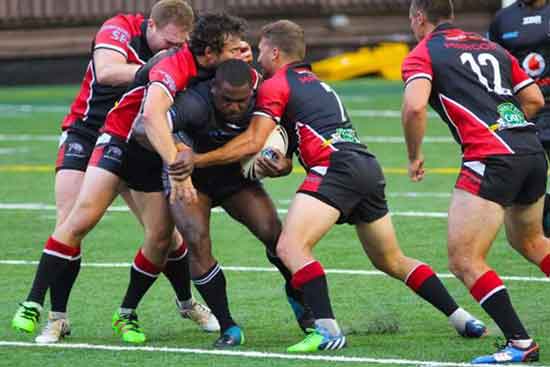 Canada’s history-making dual tour of Serbia has now come and gone and can be regarded as a success, at least on the basis of both the men’s and women’s national teams coming home with winning records.

The men’s team, Wolverines, posted a 2-1 record, while the women’s team, Ravens, made it a clean sweep at 2-0.

As RugbyLeaguePlanet has reported since breaking the news about the tour in June, it was the first time that men’s and women’s national teams from the same country simultaneously toured another nation.

Canada Rugby League Association (CRLA) president Bob Jowett says the Ravens team that went to Serbia was more or less a select side that included a number of rookies, as well as some more experienced players such as MacKenzie Fane, who led the squad.

Fane was the first Canadian to go to Australia to play in the NRL Women’s league and prior to that, she played for the Ravens at the 2017 Women’s Rugby League World Cup and the 2018 Commonwealth Games Nines.

She thinks the tour has provided a sound basis for the future of the Canadian women’s program, particularly as it was the first time many of the girls had an opportunity to play together, as well as offering a fresh strategical insight in terms of game preparation.

“Probably analyzing the strengths and weaknesses of Serbia and using that to better ourselves,” says Fane. “If we are to continue to excel and beat teams like Australia and New Zealand then we need to not only look at ourselves, but we also have to study our opposition.”

She says the Canadian players and coaches from both teams have brought back some valuable take-aways.

“I hope to walk away from this tour with the knowledge that my players have had a great experience, have built lasting connections and memories with each other and have made waves in their development as World Cup 2021 hopefuls.

“I don’t think that a senior player could hope to come away with anything more important than that, especially with a squad of so many debutantes.”

As for where the women’s game is right now in Canada, according to Fane, it’s in a pretty good place.

“The game continues to grow and the trip over to Serbia will hopefully enhance the provincial programs by generating awareness and intrigue in the sport,” she adds. “The plan is to continue to tour every year which only generates interest at home.”

While rugby league doesn’t have a foothold in every Canadian province, not yet anyway, Fane says the women’s game is making strides in at least three of them.

“I think Ontario and British Columbia are doing their best to promote and expand the women’s program. Alberta is very close as well.”

Fane says the Serbian tour unearthed some new up and comers who showed potential and provided a platform for others who have previously played international football.

For the Wolverines, despite dropping their final game to Serbia, the tour was also a success on two fronts. First, they finished with a winning record, and secondly, it was the first time Canada’s men’s team has toured overseas.

Since their return to international rugby league in 2010, prior to touring Serbia, all of their away Tests have been in the US, apart from one in Jamaica in 2017.

Captain Scyler Dumas says the Wolverines too have laid solid groundwork for the future.

“We’ve won two out of three games this trip and it’s a success in my book,” he says. “We’re better for it, and we need these games to build for the 2025 Rugby League World Cup.”

CRLA president Jowett believes that the historic tour was a success for the game in general.

“With a series of (largely) competitive games, the tour can only benefit all the players who have taken part,” he says.

“The positive publicity that the tour has generated further instills the Wolverines and Ravens brands into the minds of Rugby League in Canada and beyond. The tour has undoubtedly been a success and I suspect that it will influence how the Canada national teams are promoted in the future.”