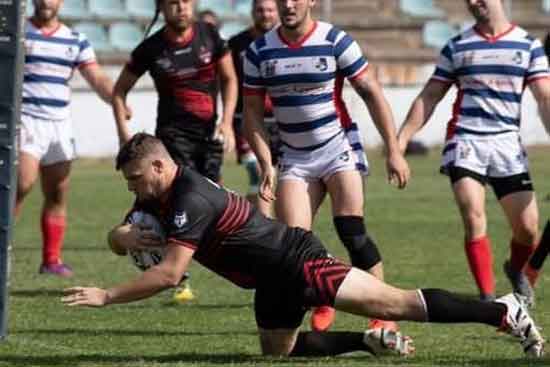 The Canadian men’s and women’s national teams wrapped up their history-making dual tour of Serbia with split results at the weekend in Belgrade.

The women’s team, Ravens, finished over the top of the Serbs with a 26-4 victory, while in what could probably be considered an upset, the men’s team, Wolverines, dropped their final game 36-8.

In the women’s game, a tight first half saw the Ravens lead narrowly 8-4 at halftime, but they dialled up the pressure in the second forty and the Serbs couldn’t stem the tide.

“Despite having 15 rookies out of 17, the players all came together so brilliantly throughout this tour,” said Canada Ravens captain MacKenzie Fane.

“In a matter of just nine days, we had players willing to put their bodies on the line for each other. To be able to establish that level of trust and dedication to each other so quickly, I was just so impressed and proud of the team, and it showed in the way we played.

“Inexperienced at times, but always positive and united. The goal is Rugby League World Cup 2021 and we are always looking to work towards that. This tour was a critical step in our development, and I am excited for the future.”

The Ravens made a clean sweep of their two internationals against the Serbian women having won the first match 36-4.

As for the Wolverines, their game was played after the women’s match and with two wins already in the books in Serbia, and three wins in a row dating back to last year’s 2021 Rugby League World Cup Americas region qualifiers, they gave themselves a good chance against a stronger Serbian side fresh off their domestic competition.

However, the Canadians crashed back to reality as the Serbians ran riot in a hot and dry Belgrade stadium to put a final dent in the tour.

“Really disappointing actually, but that’s footy. They came out of the blocks pretty quickly and we didn’t have much to offer. We’ve won two out of three games this trip though, and it’s a success in my book.

“We’re better for it, and we need these games to build for the 2025 Rugby League World Cup. We’re building for it, and it’s started. Really proud of the boys. We’re learning, playing and ripping in together and we’re finally building something special.”

The Wolverines won their two earlier tour games against a Bosnian select side and Serbia A.